A California cafe reopens with a payroll loan, but the future unclear 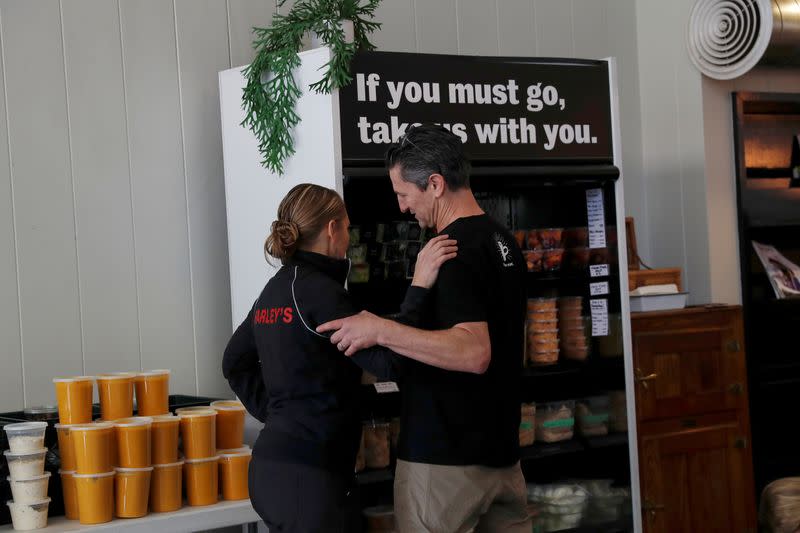 FILE PHOTO: Amy and Chris Hillyard, owners of Farley’s East cafe that closed due to the financial crisis caused by the coronavirus disease (COVID-19), embrace at the cafe in Oakland, California

SAN FRANCISCO (Reuters) – Chris and Amy Hillyard opened their Oakland, California restaurant late last month for the first time since mid-March, thanks in large part to a government loan aimed at tiding over small firms during the worst of the coronavirus crisis.

The loan, part of the $2.3 trillion economic relief package passed by Congress in late March, is designed to cover two months’ worth of payroll, rent and utilities for firms with fewer than 500 employees.

But the Hillyards’ once-crowded restaurant, Farley’s East, is now a takeout operation that needs fewer than half its former staff, at least through the end of May when the San Francisco region’s stay-at-home order is due to expire.

Even then dine-in seating is likely to be curtailed to limit the virus’ spread, and grave doubts remain over how quickly consumer spending decimated by an unprecedented surge in unemployment could pick back up.

Customers who used to work nearby have told Chris that even when their office buildings do reopen, they expect to continue to do their jobs mostly from home.

“Our business will fundamentally change as a result of this, long term,” Chris says. “We have eight weeks to figure out how to make it work.”

The Hillyard’s restaurant is one of millions of small businesses in the United States facing an uncertain future after the new coronavirus shut down shops, restaurants, schools and travel in the world’s biggest consumer economy. Over the next 12 months, Reuters will chronicle the journey of several small businesses owners around the U.S.

The idea is simple: to help small businesses keep on their employees during coronavirus shutdowns so that on the other side they’ll be able to quickly resume normal operations.

In practice it was not so straightforward.

The program opened on April 3 with an initial $349 billion in funding. The rollout was marred by technical glitches as many of the nation’s 30 million small businesses tried to access the cash.

The money was exhausted within two weeks. Congress added an additional $310 billion to the program in late April, of which about $191 billion has been allocated so far.

The Hillyards had shut down Farley’s East in Oakland and their small San Francisco cafe, Farley’s, on March 17 when the region’s stay-at-home order came down. They laid off all 40 employees.

“We had to pause and just take a step back and figure out how we’re going to get out of this hole that we’re in financially,” Chris said. It was “a pretty depressing situation.”

They applied for a PPP loan on April 6.

Meanwhile they launched several new business lines to generate at least some revenue, including weekly “family meals” like biscuits and chicken, prepared by their own family of four, for a few dozen customers. They also made meals for emergency room workers and the homeless through partnerships with local nonprofit groups.

On April 23, the $221,000 PPP loan hit the Hillyards’ bank account. It was one of 345 loans totaling $83.5 million made under the program by Community Bank of the Bay, a community development financial institution.

“It was a huge relief,” Chris said. “I’m feeling a little more optimistic about our plans going forward and that we have a plan in place to try to get out of this situation.”

The Hillyards had opened a takeout window at Farley’s a few days earlier, and with the new loan quickly rehired 15 employees to reboot Farley’s East on April 29.

The first day’s sales of salads and lattes through a newly installed plexiglass-shielded takeout window were “good, not great,” Chris said. Since then revenue has remained where it was that first day: about 20% of the pre-crisis norm, before office buildings that surround his establishment emptied out so workers could do their jobs from home.

The Hillyards plan to use the $221,000 to cover payroll, rent and utilities through late June, and expect most to be eligible for forgiveness under the terms of the program.

They plan to cover other expenses – including past-due payments to vendors and interest on a years-ago remodeling loan – with income from the reopened shop that now also sells provisions like flour, coconut chia pudding and eggs, with now twice-weekly family meals, and plans for a new line of deli offerings catering to people who live nearby.

Still, once the PPP loan runs out, it’s not clear what is in store.

The loan provides “a little bit of a financial runway to change our business models” to match the pandemic economy, Amy said. For now, she says, “we are trying not to think about whether or not we are going to make money.”