American quandary: how to secure weapons-grade minerals without China 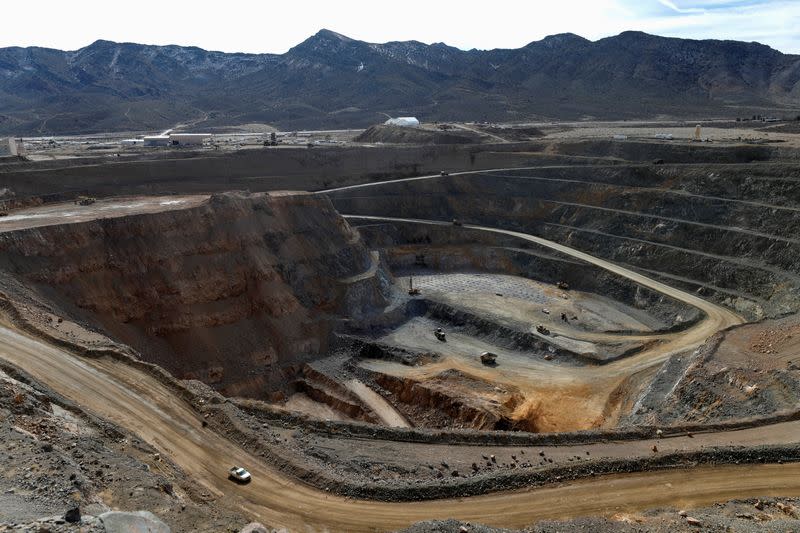 MOUNTAIN PASS, Calif. (Reuters) – The United States wants to curb its reliance on China for specialized minerals used to make weapons and high-tech equipment, but it faces a Catch-22.

It only has one rare earths mine – and government scientists have been told not to work with it because of its Chinese ties.

The mine is southern California’s Mountain Pass, home to the world’s eighth-largest reserves of the rare earths used in missiles, fighter jets, night-vision goggles and other devices.

But the U.S. Department of Energy (DOE) has told government scientists not to collaborate with the mine’s owner, MP Materials, the DOE’s Critical Materials Institute told Reuters.

This is because MP Materials is almost a tenth-owned by a Chinese investor and relies heavily on Chinese sales and technical know-how, according to the company.

“Clearly, the MP Materials ownership structure is an issue,” said Tom Lograsso, interim director of the institute, the focal point of the U.S. government’s rare earths research and a facility that typically works closely with private industry.

“We’re going to allow the people in Washington to figure this out.”

The DOE instruction, which has not been previously reported, illustrates the competing pressures facing officials looking to resurrect the U.S. commercial rare earths industry, which has all but disappeared since its genesis in World War Two’s Manhattan Project to develop the atomic bomb. Lograsso did not say how the guidance was delivered to the institute.

Reviving domestic rare earths production has become a priority in Washington as relations with China, which dominates global supplies, have become increasingly frayed and U.S. lawmakers warn of the dangers of relying on a competitor for critical defense components.

Even as the DOE has blacklisted MP Materials, the company is a candidate to receive up to $40 million in funding from the Pentagon, according to two sources familiar with the matter.

The Pentagon has yet to announce its decision on funding, which could go to more than one project, after delaying the decision from March due to the coronavirus crisis.

MP Materials is by far the most advanced player in the U.S. rare earths industry, given no rival project has even broken ground. As such, Mountain Pass is widely seen by industry analysts as the front-runner for Pentagon funding.

The DOE did not respond to requests for comment on the instruction to scientists or any potential conflict with Pentagon policy.

The Pentagon is working closely with “the president, Congress, allies, partners and the industrial base to mitigate U.S. reliance on China for rare earth minerals,” said spokesman Lt Col Mike Andrews. The department did not respond to requests for comment on whether it might fund Mountain Pass or potential conflicts with DOE policy.

MP Materials, which bought the mine in 2017, describes itself as an American-controlled company with a predominantly U.S. workforce. The privately held firm is 9.9%-owned by China’s Shenghe Resources Holding Co, though, and Chinese customers account for all its annual revenue of about $100 million.

“Had we not had a Chinese technical partner helping us do this relaunch, there’s no way this could have been done,” said James Litinsky, chief executive of JHL Capital Group LLC, a Chicago-based hedge fund and MP Materials’ majority owner.

Asked for comment on the DOE instruction to scientists, Litinsky said: “MP is on a mission to restore the full rare earth supply chain to the United States of America, whether the government helps us or not.”

The COVID-19 pandemic has further driven home the global nature of supply chains and how heavily Western countries rely on manufacturing powerhouse China for a host of key products, including drug ingredients.

Mountain Pass first opened in the late 1940s to extract europium, a rare earth used to produce the color red in televisions. It drew heavily on technology developed by Manhattan Project government scientists to separate the 17 rare earths, a complex and expensive process.

By the early 1980s, the mine was a top global rare earths producer. Its minerals were in much of the equipment that U.S. soldiers used during the first Gulf War in 1990.

In 2010, China halted supplies to Japan during a diplomatic dispute, unnerving U.S. military officials who wondered if China could one day do the same to the United States.

That refocused Washington’s attention on the mine and its then-owner Molycorp, which launched a $400 million initial public offering the same year.

However, even as U.S. government scientists had begun research projects with Molycorp, the company went bankrupt in 2015 under the weight of its debt – partly built up to comply with tightened environmental regulations from the Obama administration – and cheaper Chinese competition.

For now, MP Materials ships more than 50,000 tonnes of concentrated rare earths per year to China for processing, the Achilles heel of the U.S. industry.

The company aims to restart its own processing by the end of 2020, Litinsky said. The goal is to produce about 5,000 tonnes per year of the two most common rare earth metals, more than enough for U.S. military needs.

Some rare earths analysts and academics have doubted whether Mountain Pass can resume processing so soon, citing concerns about its plans for waste disposal and water filtration.

“It would be national security malpractice not to address this,” said Rubio, who sits on the Senate’s Intelligence and Foreign Relations committees.

This was echoed by Representative Chrissy Houlahan, a Pennsylvania Democrat, who said the issue of creating a viable domestic industry had been ignored for too many years.

“This isn’t an issue we can just kick down the road,” said Houlahan, who sits on the House Armed Services Committee.

The Pentagon asked miners in early 2019 to outline plans to develop rare earths projects and processing facilities, according to documents seen by Reuters.

On Wednesday, Australia-based Lynas Corp and privately held Blue Line Corp said they were chosen by the Pentagon to process in Texas so-called heavy rare earths, a less-common type of the specialized minerals, imported from Australia. The deadline for that project was in December.

MP Materials is said to have applied for the light rare earths funding, the deadline for which was March 2. No decision has been announced. Light rare earths are the most-commonly used of the specialized materials.

Meanwhile, U.S. government scientists at the DOE institute are studying ways to recycle rare earth magnets, to find substitutes and to locate new sources of the strategic minerals. None of that research is shared with MP Materials.

“MP Materials recognizes they have become the elephant in the room that the U.S. government doesn’t want to acknowledge, given their relationship with Shenghe,” said Ryan Castilloux, a rare earths industry consultant at Adamas Intelligence.

Tron is the Fourth Blockchain to Receive a Coveted Twitter Emoji

HSBC shares rise after break-call from Ping An