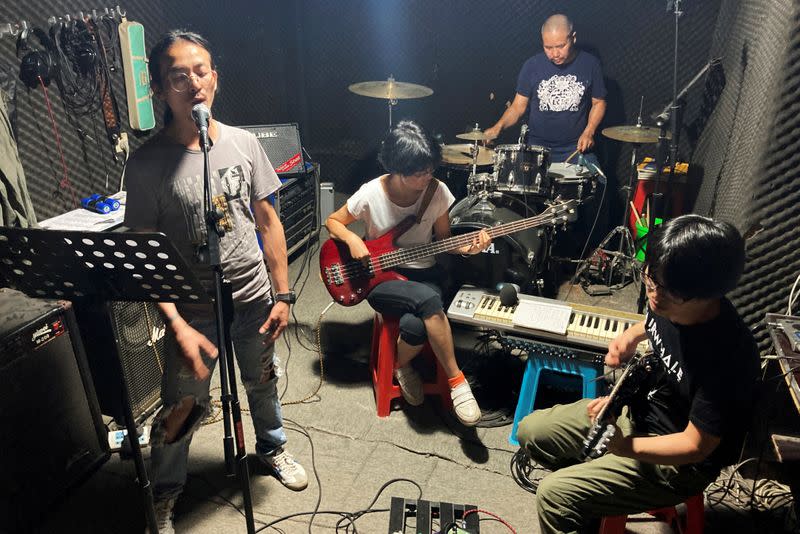 SHENZHEN, China (Reuters) – Wang Zongxing hoped that opening a restaurant would lead to an easier life after 14 years of working long hours in Shenzhen’s factories, but serving the spicy noodles of his central China hometown was never his dream.

Known by his stage name, Ghost, he is the front man of Zhong-D-Yin, whose songs tell of the lives of workers in crowded dormitories, loneliness, romance and risking injuries.

“I don’t think about my role in life when on stage,” said Wang, 33. “For example, you open a restaurant and you are a chef. In the family, you are a son. I think my joy comes from the moment on the stage, when I can feel I am myself.”

The five-member band, based in Shenzhen’s industrial Henggang area, an hour’s drive from downtown, started nine years ago when a charity project involving its current drummer taught factory workers to play instruments.

Zhong-D-Yin, whose name puns on the Chinese for “subwoofer” and “heavy grassroots music,” has made its mission to document the life and culture of migrant labour as it is pushed out from the city. Economic pressures and rising land prices have led many factories to move inland or to Southeast Asia over the last eight years, the band said.

The coronavirus has sped that up, with many of Henggang’s migrant workers giving up on returning to Shenzhen after lockdowns kept them away.

“The virus impact was huge,” Wang says, frying noodles over a roaring flame in the cramped kitchen of his restaurant. “Not so many people are working here now. Unless things change, maybe the restaurant will survive another two months.”

The dip in business has forced him to take a job at a small cardboard box factory, but even there, he said, “there’s just not enough work to go around.”

WE BUILT THIS CITY

Shenzhen grew quickly in from its rural roots in the 1980s into a gleaming symbol of China’s emergence as a global economic power.

But with Shenzhen’s government focused on next-generation industries, and some of China’s highest property prices, lower-end manufacturers are being pushed out.

“Ten years ago this area was all factories or dusty plots,” Wang says on the 10-minute walk from the noodle shop to the band’s practise studio.

“Now there’s a subway, a highway, fancy malls,” he said. “But now an apartment costs 3,200 yuan a month. A factory salary is 5,000 yuan a month. Life’s becoming impossible for workers.”

It is even harder in the aftermath of the coronavirus.

A since-retracted report from brokerage Zhongtai Securities last month said the virus could have cost about 70 million jobs, implying an unemployment rate of 20.5%, far above the official 5.9% rate for March.

RAGING IN MEMORY OF THE MACHINE

Huang, a social worker, is the only member of the band without a factory background.

“The grass is growing out (at the factories)，there are no more machines running … but we want to record the memories of workers, write down our own history and have our own voice about what life was like here,” she said.

The band is preparing for its first post-virus performance next month.

“We want to memorialize those lost, so that people in the future know their lives matter,” Huang said.

Israel's El Al airline may be heading back into state hands