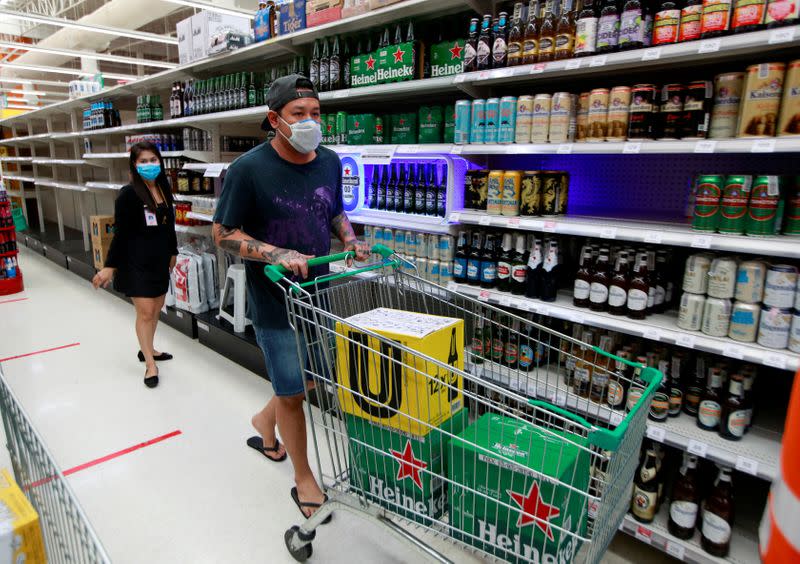 rFILE PHOTO: The spread of the coronavirus disease (COVID-19) in Bangkok

BRUSSELS (Reuters) – When Lionel Platteuw started planning how he would cope under Belgium’s coronavirus lockdown, there was one item he wanted to make sure he had enough of – alcohol.

“My first concern was that we didn’t have enough beer and wine,” said the Brussels-based consultant. “I wasn’t concerned about toilet paper, but I didn’t want to be stuck at home without alcohol supplies.”

Soaring sales of beer, wine and spirits at retail outlets suggest drinkers across the world took a similar attitude.

Sales at British liquor stores leapt a third in March, while those for alcohol at U.S. retailers shot up more than 50% in the week after the country entered a state of national emergency.

But the drinks industry isn’t popping any corks.

The surge in demand came as sales through bars, clubs and restaurants fell to zero as they were closed to contain the virus. And even as countries start to ease restrictions, these venues are likely to be at the back of the line to reopen.

Manufacturers have also faced supply disruptions and, in some countries, even a ban on sales as authorities worry excessive drinking could jeopardise social distancing efforts.

In the United States, “on-trade” drinking at bars and restaurants accounts for about 20% of spirits sales and 25% for beer, so off-premise drinking would need to keep growing by 25-30% to compensate.

The signs are it’s already starting to slow.

While U.S. stores’ alcohol sales are up a quarter since early March, the rate of growth slowed to 16% in the week to April 18, according to market research firm Nielsen.

In Europe, bars generally account for a bigger proportion of alcohol sales, rising to 60% in Spain. In many developing countries, including China and Brazil and for beer in Nigeria and Ethiopia, at least half of drinking is in bars.

Dutch rival Heineken noted that even store-bought alcohol was often designed for group events now barred in most countries.

“Beer belongs to social occasions and these occasions for consumption are simply lost,” Chief Executive Jean-Francois van Boxmeer said last month, after reporting beer volumes fell by a third in Italy and a quarter in Spain in March.

Lockdowns have created other problems for drinks makers.

They have had to suspend production in countries such as China, India, Malaysia and Mexico, where there was only about 10 days of beer inventory last week.

Pernod Ricard, the maker of Absolut vodka and Jameson whiskey, has forecast an 80% decline of its “travel retail” business from February to June.

In India, the world’s largest whisky market, most alcohol shops were forced to shut in its countrywide lockdown. South Africa has banned all alcohol sales for more than a month.

As restrictions start to ease, it is not clear how quickly drinkers will return to old habits.

Manit Parikh, the head of an English learning technology company in Bengaluru, said he was “gutted” at not being able to have a drink or two in the lockdown, but also scared to go to liquor stores when they reopened with long lines on Monday.

New York-based insurance industry temp Samantha Gool said she switched to more vodka from beer and her drinking increased when confined at home, although may have started to taper.

Spiros Malandrakis, head of alcoholic drinks research at Euromonitor International, believes there won’t be a surge in demand as lockdowns gradually ease, with some bars going bust, social distancing limiting business and some customers wary of going out.

He also believes the crisis could spell the end, or at least the suspension, of an industry-wide trend of the past two decades – persuading drinkers to spend more on “premium” brands.

In the global financial crisis of 2008-2009, consumers traded down to cheaper products. And all the signs suggest the hit to jobs and economies from the coronavirus pandemic – at least in the short term – will be much bigger.

Wine consumption in Europe is forecast to fall by 8% this year, with a particular hit for sparkling and vintage wines, according to the European Commission.

Many smaller players, particularly once booming craft brewers, are suffering.

Last year, the number of breweries in Europe passed 10,000. Pierre-Olivier Bergeron, secretary-general of the Brewers of Europe, sees the European market dropping by a third.

“Some players have no channels to retail at all,” he said. “There will be people who will simply not survive.”