Central banks' pandemic battle could stretch into an infinity war 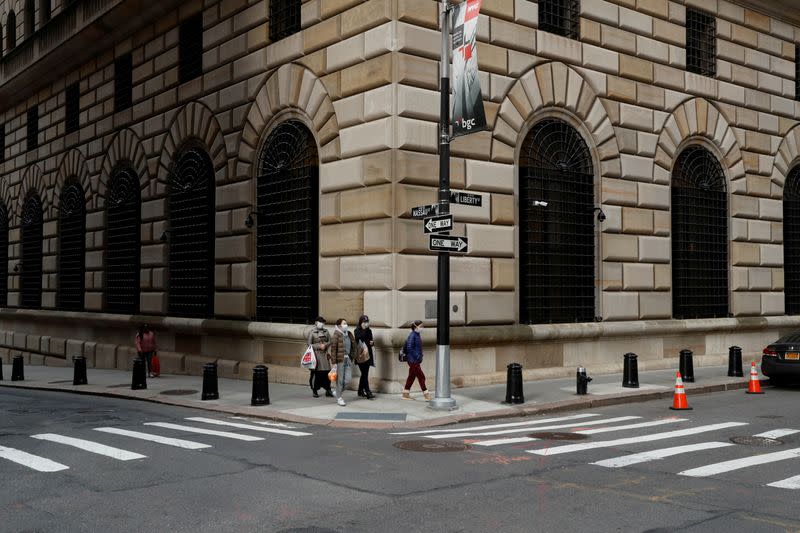 By Howard Schneider and Balazs Koranyi

WASHINGTON/FRANKFURT (Reuters) – Big central banks are buying from an expanding menu of government bonds, corporate debt and consumer loans to help businesses and households through the coronavirus pandemic — and no one knows whether they can stop.

In the extreme case that a recurring virus requires further damaging lockdowns, the U.S. Federal Reserve and its peers float the whole boat — government debt, corporate debt, perhaps even financing for mortgages and paychecks.

The social, political and economic implications of taking economies offline for an extended period, underwritten by governments and struggling to return to normal, could run deep.

“It gets to the question: At what point are we worried with just how much a role the Fed is playing?” said Kathryn Judge, a Columbia Law School professor who studies financial markets.

“If they are the only actor and people are worried about liquidity and access to finance, how much pressure comes to bear? Longer term it is disconcerting.”

The Bank of England announced in May that it would buy more government bonds just as Britain’s Treasury said it would incur more debt to pay the wages of laid-off workers.

BoE policymaker Jan Vlieghe said the unprecedented coordinated action resembled what might happen “if we were the central bank of the Weimar Republic or Zimbabwe”, both disastrous examples of government ordering central banks around. The difference, Vlieghe said, was that no one in the government told the BoE what to do.

But what if they didn’t have to, because such cooperation had become an unspoken new orthodoxy?

THE SHIFTING VIEW OF ‘NORMAL’

Japan is arguably at that point.

A decades-long fight against deflation — a chronic drop in prices that causes incomes and economic growth to fall — has seen the Bank of Japan steadily increase its footprint.

It now owns nearly half of all Japanese government bonds, and last week agreed to buy as much as needed during the crisis.

The BOJ, which in February owned 4.7% of Japan’s corporate bond market and about 10% of the shorter-term corporate loans known as commercial paper, also expanded corporate debt purchases.

In Europe and the United States, similar “unconventional” policy tools were used in 2008 to fight a financial crisis that spilled into the real economy.

The Fed bought about $4 trillion of government bonds to lower borrowing costs and used other means to keep markets flush with cash and remove soured mortgages from lenders’ books.

The previously unused measures, which helped preserve jobs and support growth, were meant to be exceptional.

But the shock of the coronavirus is pushing the boundaries further.

The repercussions for some European economies, notably Italy, have been so severe that analysts expect the European Central Bank to use its broad power to enact a rescue.

One way would be if politicians agree to put Italy or possibly the entire currency union in an emergency programme that would allow the ECB to finance national debts under a scheme known as Outright Monetary Transactions.

“It’s a given that OMT will be activated,” said Salman Ahmed, chief investment strategist at Lombard Odier Investment Managers, adding: “Once OMT is in place, it will be a perpetual situation.”

ECB President Christine Lagarde said on Thursday that its “flexible” Pandemic Emergency Purchase Programme was a better tool for the current situation than OMT, an unused relic of the previous crisis.

The Fed did close down the various emergency and “bailout” programs it launched to deal with the 2007-2009 crisis — at a profit to the U.S. Treasury — and hopes to avoid making any enduring commitments this time.

It has added about $2.5 trillion to its holdings since the crisis began, giving it assets of $6.7 trillion as of last week. Cornerstone Macro analyst Roberto Perli said he expects that total to peak around $9 trillion and be declining by year-end as conditions stabilize and loans are repaid.

Demand for three initial Fed facilities for bond and money markets has been just $90 billion so far.

But without a vaccine or clear virus suppression, central banks may just be getting started. The Fed, which helped financial institutions in the last crisis, is already buying corporate bonds, lending to state and local governments, and agreeing to fund up to 95% of bank loans to potentially thousands of businesses.

Even before they are up and running, the programs have been expanded to reach more and riskier borrowers, including some downgraded “fallen angel” corporations, smaller cities and counties, and more highly leveraged companies.

All these changes rely on loss-covering capital from the Treasury — whose debts the Fed has pledged to buy in whatever amounts the Fed feels are needed.

Private sector debt in the United States totaled about $32 trillion late last year, while the federal government’s debt is around $24 trillion, compared with 2019 GDP of $21.7 trillion.

The numbers are big. But so are the promises.

“We’re still putting out the fire. We’re still trying to win. And I think we’ll be at that for a while,” Fed chair Jerome Powell said this week. “We won’t run out of money.”

(Reporting by Howard Schneider in Washington and Balazs Koranyi in Frankfurt; Additional reporting by Leika Kihara in Tokyo and William Schomberg in London; Editing by Catherine Evans)