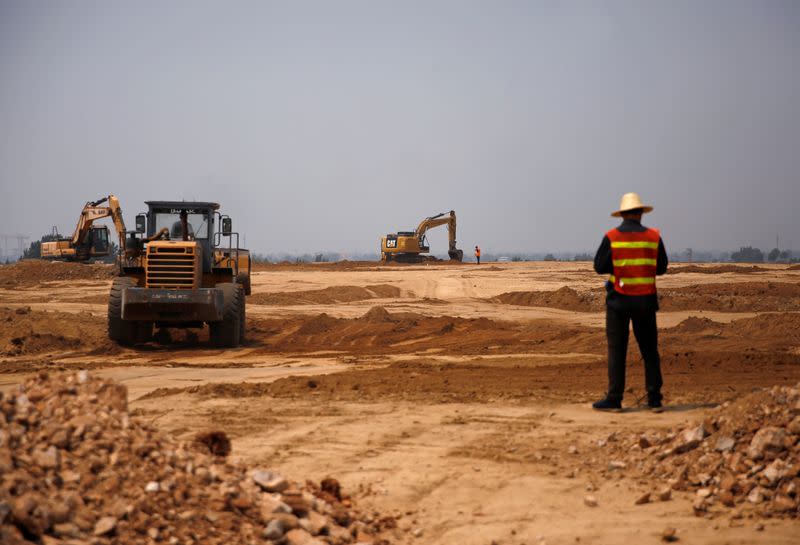 BEIJING (Reuters) – China is building industrial pig farms near its urban areas, reversing years of policies to relocate the livestock over waste concerns, as the government prioritises food security over the environment after African swine fever decimated its herds.

The world’s biggest pork consumer will add about 200 million pigs by constructing new farms around the country to restore output after the swine fever outbreak that started in 2018. But new farms going up in the suburbs of major cities face high costs to prevent the problems like farm run-off leaking into water and soil that prompted the government to relocate them between 2015 and 2017.

Zu Sheng, owner of Sifanghong Agriculture and Animal Husbandry, is building one of 11 farms planned for the outskirts of Beijing this year. His site, located in the city’s eastern district of Pinggu, about 70 km (43 miles) outside of the city centre, will eventually raise 60,000 pigs per year.

Top pork producer New Hope Liuhe is also planning a multi-story farm in Pinggu that will produce 150,000 pigs a year. Another six farms are being rebuilt and expanded, the Beijing municipal government told Reuters.

The Ministry of Agriculture and Rural Affairs did not respond to a fax requesting comments on changes in pig farm policy.

The Chinese government sees stabilizing pork supplies as crucial to food security after inflation spiked in 2019 because of record pork costs. To guarantee a minimum supply in each region, every province and major municipality must now ensure a certain amount of pork production.

“It’s kind of a correction of earlier policies,” said Wang Lisheng, a China economist at Nomura International, adding that policymakers had learned from last year’s crisis that they needed to “diversify risk”.

Home to more than 20 million people, Beijing must produce 890,000 pigs a year by 2022 to meet a tenth of its pork needs, according to a plan drawn up this year, about three times what it raised last year.

To meet those goals, the city government selected suitable sites for new farms and invited firms to bid for the plots, streamlining the cumbersome procedures normally required to find land for raising pigs.

Other cities and developed regions are making a similar push. Nanjing, a southeastern city of 8 million, is building 12 farms to raise hog output four times higher than in 2018.

Zhejiang, a coastal province south of Shanghai, wants to produce 50% more pigs than in 2018.

Raising pigs closer to urban areas would partly reverse the effects of an earlier national campaign to clean the environment that shuttered more than 200,000 mostly small farms near water bodies and in populated areas. https://reut.rs/3g9Bokv

Instead, the government encouraged building large-scale farms in the northeastern provinces of Heilongjiang, Jilin, Liaoning and Inner Mongolia where there is more land and fewer people. https://reut.rs/2XnBKeL

Pigs were then trucked to urban slaughterhouses to satisfy consumers’ appetite for fresh pork, but a ban on moving live hogs to curb the African swine fever spread disrupted that business model.

Unlike most of the farms that were shut, the large-scale operations require less land per pig produced and are more efficient and less labour intensive.

Owners like Zu say modern farms are less likely to damage the environment than the smallholders shut previously.

But to achieve cleaner standards, Chinese pig producers must build waste treatment facilities that cost about 500 yuan ($70.57) per sow.

Not all are properly run, however. In 2018, the Ministry of Ecology and Environment found less than half the large livestock farms in Heilongjiang had installed proper waste treatment facilities or did not run them correctly. https://reut.rs/2ZOhm9u

Farms close to cities also have to meet higher quality standards on the water discharged after treatment, further raising costs.

Sifanghong hopes its treated waste water can be used on crops grown by nearby farmers, said farm manager Wang Zhankun. The Pinggu district government runs a project to collect solid waste and distribute it as fertiliser, an official said.

Odour is also a major issue for farms near urban areas, leading to the installation of deodorisers that remove up to 70% of the stench but add extra cost, said Hog Slat’s Zou.

There are also biosecurity concerns, he added, as raising pigs closer to people increases the risk of the transmission of viruses like African swine fever.

“We really don’t like to raise pigs near where people live. But we’re doing this because of African swine fever,” he said, noting the pig movement ban.