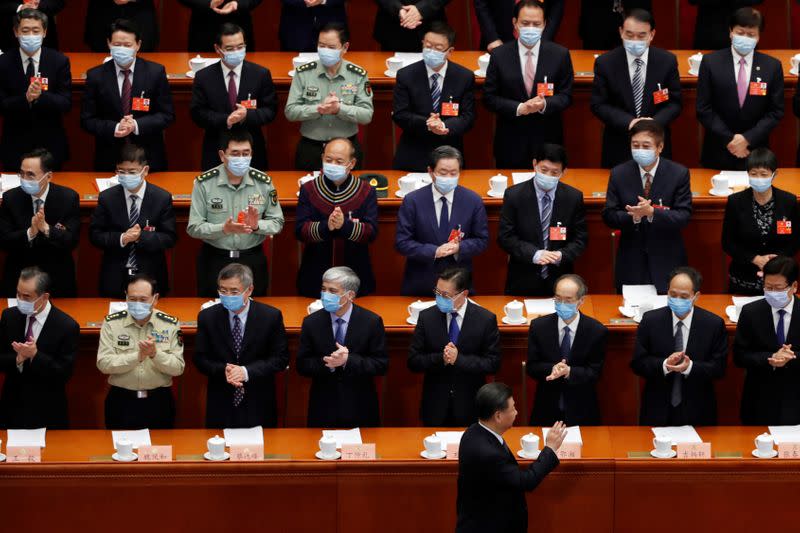 (Reuters) – China’s parliament is poised to enact its first civil code, a wide-ranging legislative package that includes strengthening protection of property rights in a Communist Party-ruled country whose embrace of private ownership has long been awkward.

The civil code, in the works since 2014, will become law at a time when China needs its often-embattled private sector to step up investment to help revive a virus-battered economy, and will be a centrepiece of the annual parliamentary session that begins on Friday after a more-than two month delay.

However, the civil code is largely an amalgamation of existing laws, meaning its impact may be limited, some analysts said. And enforcement is uncertain, as courts are not independent and ultimately answer to the party, although legal reforms in recent years have aimed to give judges more independence and rein in local officials’ influence over courts.

The civil code, which among other provisions protects personal information and makes it easier to divorce or sue for sexual harassment, is expected to spell out the clearest boundary yet between government and markets since the 1949 founding of the People’s Republic of China.

It is a cornerstone of President Xi Jinping’s push to reform the country’s legal system by 2020, even as China has tightened controls on civil society and expanded party control under his leadership.

The legislation – on paper at least – reduces the scope for bureaucratic meddling and abuse that have often bedevilled private firms and property owners in a country where business owners were not allowed to join the Communist Party until 2001 and are still treated with suspicion by some party officials.

“It gives more complete protection to the rights of the individual,” said Wang Jiangyu, a law professor at the City University of Hong Kong.

“The bigger context is, is this a country that adheres to the rule of law? Is the government really executing the law?”

Implementation of the code, which incorporates existing laws including those covering property, contracts and torts, reflects long-running concerns among business owners over protection of personal and property rights.

“All private firms have their ‘original sin,'” Xu Bin, a steel trader in Henan province, told Reuters in March, referring to the sometimes dubious actions taken by entrepreneurs in the early days of China’s reform and opening.

Some worry those “sins” can still be used against them.

A 2017 survey on the climate for private sector firms by Unirule Institute of Economics, a now-defunct liberal Beijing-based think tank, found companies rated “legal fairness” 4 out of 10.

“Without legal protection, private businessmen don’t feel safe. Our survey showed that they think there is a 22.5% chance of danger to themselves and a 26.8% chance that their assets are at risk,” Sheng Hong, an independent scholar who was previously Unirule’s executive director, told Reuters.

However, the civil code will not protect entrepreneurs in criminal cases.

“Since the Civil Code only covers civil disputes, it does not help protect property rights against seizure of assets by the state, a most important concern among entrepreneurs,” said Xin Sun, a lecturer in Chinese and East Asian business at King’s College London.

Private sector investment in China has slowed sharply, to the worry of officials, from more than 20% growth when Xi assumed power to single digits in recent years. It fell 13% during the coronavirus-battered first four month of this year, compared with a 7 percent decline for state companies.

In an April meeting chaired by Xi, the Communist Party’s decision-making Politburo said the government will support the private economy and development of small- and medium-sized firms, which remain excluded from several industries and have long had difficulty securing bank credit.

“The civil code could restore confidence of private business owners and to help prop up economic growth,” said Hu Xingdou, a retired economics professor with Beijing Institute of Technology.

Sun, of King’s College, isn’t so sure, saying the civil code brings little added protection for rights and property, and is more symbol than substance.

“China does have a comprehensive system of high-quality written laws but a lot of concerns arise from their enforcement rather than the laws themselves,” he said.

Dash Core Group to Release Next Update, to Launch Testnet By Yearend