Diplomacy in the time of coronavirus: Johnson and Macron trade bows, thumbs up 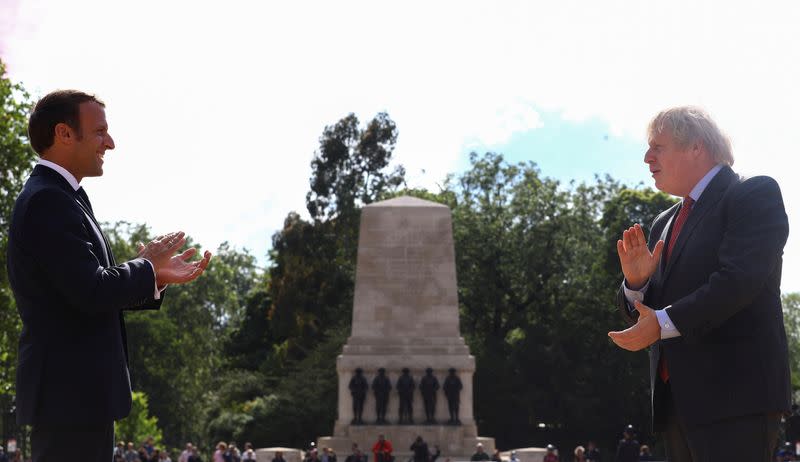 LONDON (Reuters) – Standing apart on either side of a strip of red carpet outside Number 10 Downing Street, Prime Minister Boris Johnson and French President Emmanuel Macron demonstrated the unusual reality of international diplomacy in the coronavirus era.

Macron’s visit to London on Thursday to mark the 80th anniversary of General de Gaulle’s call for wartime resistance is one of the most high-profile foreign trips by a head of state since many countries imposed lockdowns to curb the virus.

Unable to shake hands then stand shoulder to shoulder while posing for photos outside the famous black door of Number 10, which would be the usual ritual, the two leaders had to improvise.

Macron put his palms together and offered a small bow – a gesture Johnson clumsily reciprocated while waving one hand around to direct the French leader to stand at a suitable distance.

Smiling and turning to face the cameras, Macron held up an arm sideways to check the distance between the two, while Johnson offered his counterpart a slightly awkward thumbs up.

Britain’s social distancing rules state that people should remain two metres apart to help limit the spread of the coronavirus which has swept across the globe, causing tens of thousands of deaths in both Britain and France.

Macron was exempted from a 14-day quarantine period imposed by British authorities on all visitors arriving from overseas.

The scene in Downing Street was a sharp contrast to previous meetings between Macron and Johnson who, despite being at loggerheads over Brexit, appear to have a good personal rapport.

In August last year, during a diplomatic trip to try and break a Brexit deadlock, Johnson was pictured briefly putting his foot up on a coffee table inside the gilded Elysee palace in Paris as he laughed and joked with Macron.