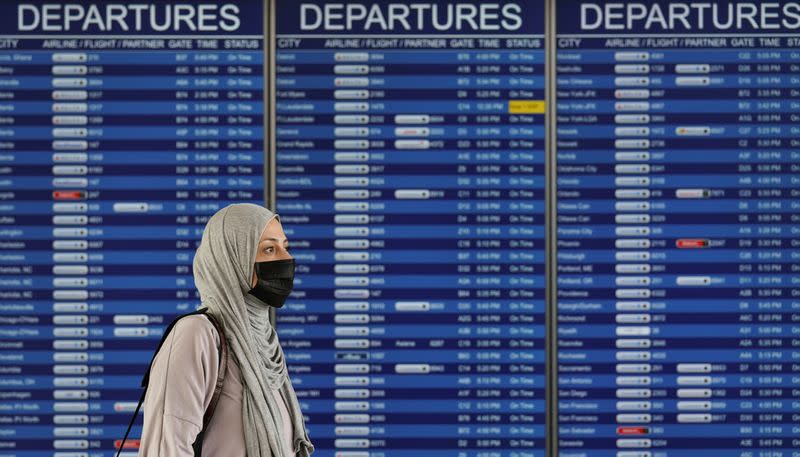 FILE PHOTO: A woman passes a departure board at Dulles International Airport in Virginia

BRUSSELS (Reuters) – It may take European Union countries until the summer or even longer to agree on how exactly to finance an economic recovery from the coronavirus pandemic as major disagreements persist, an official with the bloc said on Wednesday.

That sets expectations low for a Thursday EU summit at which the bloc’s 27 national leaders are expected to agree to use their 2021-27 joint budget to help kick-start growth. They should also rubber-stamp 500 billion euros of immediate rescue measures that should take effect from June.

The novel coronavirus has claimed tens of thousands of lives in Europe and measures to curb its spread have left economies at a virtual standstill.

“My hope is to make progress in June, July,” said the EU official, who is involved in preparing the leaders’ summit. But a final deal might take even longer, the official stressed.

The European Commission has instead proposed a compromise that could see the Brussels-based EU executive inject as much as 1.5 trillion euros into the economy by raising funds against the bloc’s joint coffers.

But the official said there was still “real reluctance” among several member states to back the Commission’s proposal.

National capitals are far from agreement on what size any recovery fund should be, whether it would make grants or repayable loans, whether, how much and what type of debt it could issue, and what countries’ responsibilities would be.

“For some member states it is important to have grants or subsidies, while for others it can only be loans. There is a big divide and we need to find the right balance,” said the official, who spoke on condition of anonymity.

A call on Monday between the leaders of Germany, France, the Netherlands, Italy and Spain went some way to assuaging “misunderstandings” between the two camps, which have squabbled over how to react to the pandemic since it hit Europe.

“There is this misunderstanding that the south wants to use the COVID crisis to put their old debt on the shoulders of the north,” the official said, referring to COVID-19, the respiratory disease caused by the novel coronavirus.

“The north fears debt mutualisation will contaminate their financial and economic positions in the future through decisions taken by the south.”

But, listing many remaining hurdles, the official said: “Political lines are moving … but it will take time.”

The Commission is expected to present a revamped proposal for the bloc’s seven-year budget, known as the Multiannual Financial Framework (MFF), on April 29, including how exactly any Recovery Fund linked to it could work.

All 27 members would have to agree unanimously for it to take effect next year — a tall order for a bloc that has been fighting over immediate economic rescue plans, medical equipment and emergency border restrictions for weeks.

EU unity is being bitterly tested by the coronavirus, having already been damaged by the economic crisis that began more than a decade ago, a migration crisis since 2015 and then by Brexit.

The bloc has agreed 500 billion euros of support for its coronavirus-hit economies, including a scheme to subsidise wages, more lending to companies through the European Investment Bank and cheap credit lines from the euro zone’s bailout fund.

Intervention by the European Central Bank has meanwhile ensured euro zone countries can still finance themselves on the debt market. But ECB President Christine Lagarde has drawn a line on how far the bank can go in helping stricken euro zone states, saying lending to governments directly would be illegal and handing out cash to citizens difficult.

Euro Continues to Threaten to Break Down