Europe wants to make its own drugs, but it needs American blood plasma 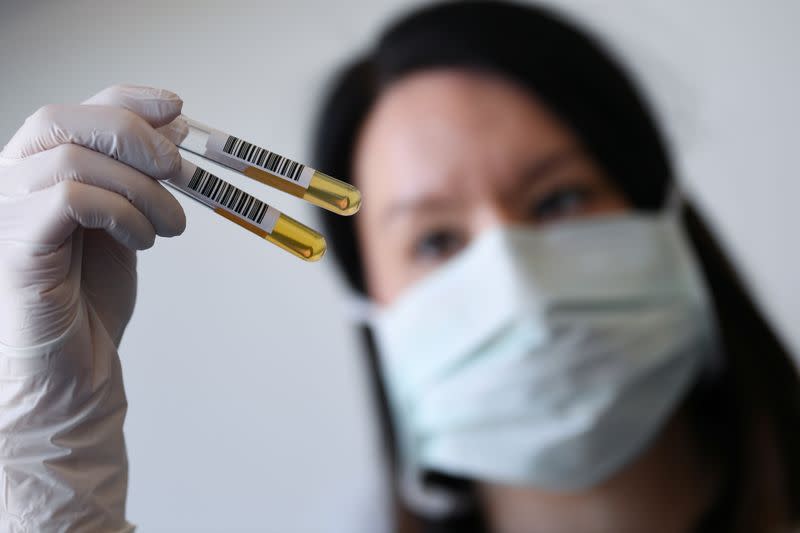 FILE PHOTO: The spread of the coronavirus disease (COVID-19) in Erlangen

BRUSSELS (Reuters) – Europe wants to be master of its own destiny in producing essential drugs and finding COVID-19 treatments, but it’s got a problem. It relies on the United States for a critical ingredient: blood plasma.

As global mistrust deepens, European Union officials are casting around for ways to reduce the bloc’s dependence on American plasma, the liquid component of blood used in a host of drugs and now widely applied in COVID-19 experimental therapies.

The coronavirus crisis should push authorities to overhaul Europe’s blood donation system, according to some industry players. The United States’ steadier plasma supplies are partly due to its system of paying people to donate blood used to develop medicines. In most European countries, donations are unpaid because of safety and ethical reasons.

A strategy for “achieving EU sufficiency” on plasma was discussed at an extraordinary COVID-19 meeting of blood experts organised last week by the European Commission, the EU executive arm, according to the meeting’s agenda.

A spokesman for the Commission had no immediate comment about the outcome of the meeting.

The EU is setting aside a large budget to increase its pharmaceutical independence. It is now funding a project to manufacture a plasma-derived medicinal product against COVID-19 and has also set up a database to share results of therapies applied in European hospitals.

Plasma has long been used to produce critical medicines such as immunoglobulins and medication that helps control bleeding. The global market for these products is worth about $20 billion a year and analysts estimate it will grow.

Around 35% of the plasma for medicines needed by about 300,000 Europeans with chronic diseases comes from the United States, according to the Plasma Protein Therapeutics Association (PPTA), a trading body for the biggest manufacturers of plasma-derived therapies.

“This situation exposes European patients to the risk of sudden interruptions of plasma supplies from the U.S.”, said an official at the European Directorate for the Quality of Medicines and Healthcare (EDQM), a body that sets quality and ethical standards for drugs in Europe.

The PPTA drugmakers body sees a strategy based on unpaid blood donations as counterproductive. It pointed to Germany, the largest collector of plasma in Europe, as one of the few countries that compensate blood donors.

The debate around payments is not new; critics point to concerns that it is unethical to pay people for parts of their body, and worries that safety standards could be compromised if companies rely financially on plasma collections.

An official from the European Blood Alliance (EBA), which brings together non-profit blood collection institutions across Europe, said concerns on supplies have increased in recent months as Europe and the United States have vied to acquire essential resources against the virus, including promising vaccines and personal protective gear..

Europe’s worries on plasma have also been exacerbated by COVID-19 lockdowns, which have kept many donors away from blood collection centres, the EBA official said.

A Commission official said measures had been taken during the pandemic to “mitigate the risk” of plasma shortages, including a temporary softening of regulatory requirements for blood collection centres.

Although no shortages for transfusions were recorded, experts said problems may arise later in the year for supplies of plasma-derived drugs.

The epidemic has boosted demand for unprocessed plasma, as many medics across the world transfuse it directly from COVID-19 survivors to infected people, often with positive results, although its efficacy is still under investigation.

If this so-called convalescent plasma, or a medicine derived from it, prove definitively effective against the disease, that could further strain Europe’s supplies, the EDQM official said, adding that a strategy for its collection at industrial scale should be quickly devised.

Convalescent plasma is also being investigated as a possible prophylaxis to prevent COVID-19 infections as antibodies extracted from it could be transfused to boost immunity defences of vulnerable people.

Japanese pharmaceutical giant Takeda is co-leading a global corporate alliance aimed at developing a plasma-based treatment for COVID-19, for which clinical trials will begin in July.

New unemployment claims fall to 52-year low: Here are the best and worst states for jobs