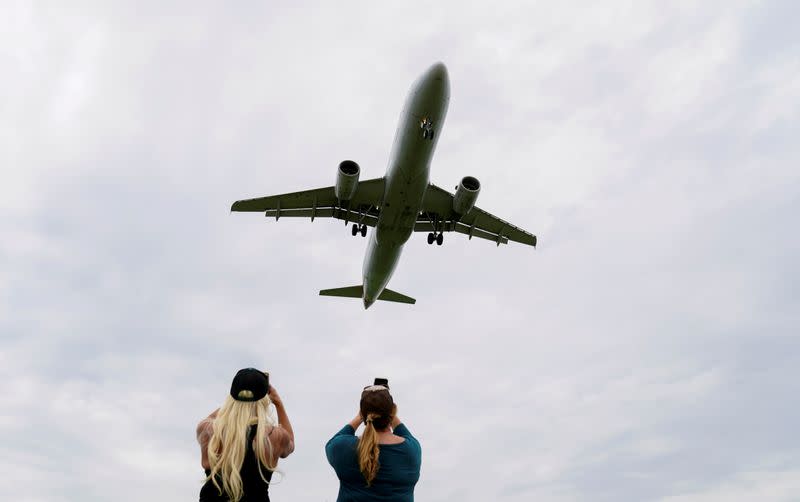 By David Shepardson and Tracy Rucinski

(Reuters) – U.S. airlines are collectively burning more than $10 billion in cash a month and averaging fewer than two dozen passengers per domestic flight because of the coronavirus pandemic, industry trade group Airlines for America said in prepared testimony seen by Reuters ahead of a U.S. Senate hearing on Wednesday.

Even after grounding more than 3,000 aircraft, or nearly 50% of the active U.S. fleet, the group said its member carriers, which include the four largest U.S. airlines, were averaging just 17 passengers per domestic flight and 29 passengers per international flight.

“The U.S. airline industry will emerge from this crisis a mere shadow of what it was just three short months ago,” the group’s chief executive, Nicholas Calio, will say, according to his prepared testimony.

Net booked passengers have fallen by nearly 100% year-on-year, according to the testimony before the Senate Commerce Committee. The group warned that if air carriers were to refund all tickets, including those purchased as nonrefundable or those canceled by a passenger instead of the carrier, “this will result in negative cash balances that will lead to bankruptcy.”

Separately, Eric Fanning, who heads the Aerospace Industries Association, will ask Congress to consider providing “temporary and targeted assistance for the ailing aviation manufacturing sector,” in testimony made public by the group.

Fanning will say at the hearing that “there is strong support in our industry for a private-public partnership to protect jobs and keep at-risk employees on the payroll through the pandemic,”

He will also raise concerns about some Federal Reserve and U.S. Treasury lending programs that have “conditions that prevent companies from accessing this aid with the speed and flexibility required.”

U.S. airlines have canceled hundreds of thousands of flights, including 80% or more of scheduled flights into June as U.S. passenger traffic has fallen by 95% since March. They are conducting additional cleaning measures and requiring all passengers to wear facial coverings.

Calio said airlines “anticipate a long and difficult road ahead. … History has shown that air transport demand has never experienced a V-shaped recovery from a downturn.”

The U.S. Treasury has awarded nearly $25 billion in cash grants to airlines to help them meet payroll costs in exchange for them agreeing not to lay off workers through Sept. 30. Major airlines have warned they will likely need to make additional cuts later this year to respond to a long-term decline in travel demand.

United Airlines Co <UAL.O> said on Monday it planned to cut at least 3,450 management and administrative workers on Oct. 1, or 30% of those workers and has also said it will reduce hours for thousands of other workers.

The International Association of Machinists and Aerospace Workers sued United on Tuesday in U.S. District Court in New York for what it called an “illegal implementation of drastic pay and benefit cuts.”

United said in a statement that the lawsuit was “meritless,” and that the reductions were in compliance with the terms of its $5 billion in federal assistance and its collective bargaining agreements.

(Reporting by David Shepardson in Washington and Tracy Rucinski in Chicago; Editing by Matthew Lewis and Peter Cooney)

WEF 2022: Blockchain and digitization to take center stage at Davos