From food to cars, Saudis stock up ahead of VAT hike 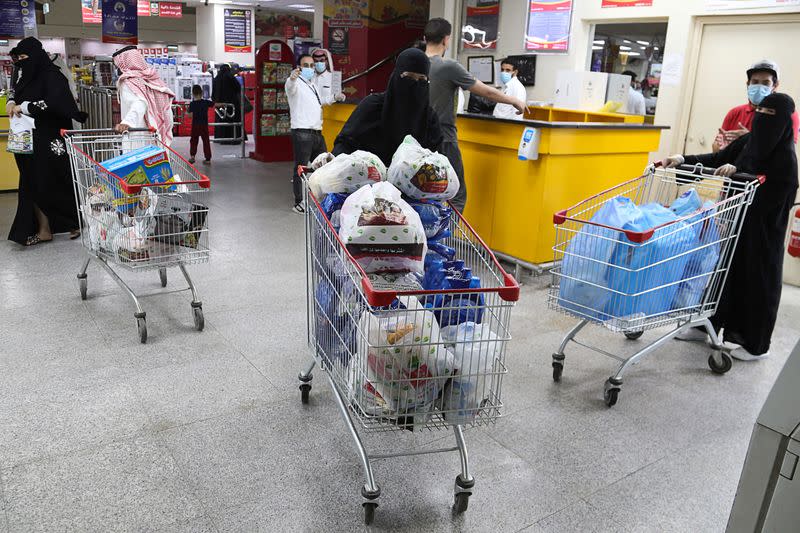 By Marwa Rashad and Davide Barbuscia

RIYADH/DUBAI (Reuters) – People in Saudi Arabia rushed to buy goods from imported fruit juices to cars ahead of a sharp hike in value-added tax on July 1, introduced by the oil-rich kingdom to boost state revenues amid its worst ever economic decline.

The tripling of VAT to 15% comes against a backdrop of lower consumer spending and an easing of inflation due to a three-month coronavirus lockdown that was fully lifted on June 21.

Supermarkets in the capital Riyadh were packed over the weekend as shoppers stockpiled non-perishable goods. Furniture and appliances stores offered discounts to lure buyers.

“Demand has been very weak but people are now actively buying ahead of the VAT so there is a bit of demand,” said Najem Alotaibe, a car dealer in Riyadh.

Jaber al-Sahari, who works in a gold shop, also reported an increase in demand in the last two weeks.

Saudi Arabia announced the VAT hike and suspension of a cost of living allowance in May, shocking citizens and businesses expecting more support from the government.

“Life is getting more expensive. I bought some imported food and juices and stored it because prices will rise,” said Sarah, a Saudi mother of two.

In recent months inflation eased to around 1% due to low demand for non-food items and reduced fuel prices, but some analysts expect it to surge by up to 6% year-on-year in July due to the VAT hike.

Authorities this month increased import tariffs to contain a ballooning fiscal deficit, which the International Monetary Fund projects at over 12% of GDP from 4.5% last year.

These steps could reduce the overall deficit by 4.5% to 6% of GDP, but may dampen economic recovery, Arqaam Capital has said.

For Abu Omar, an Egyptian expatriate, the VAT hike comes on top of a 20% salary reduction due to the coronavirus crisis.

“So now I have to live with 35% less, this will be very difficult with three kids,” he said.

This week in Trumponomics: It’s a depression