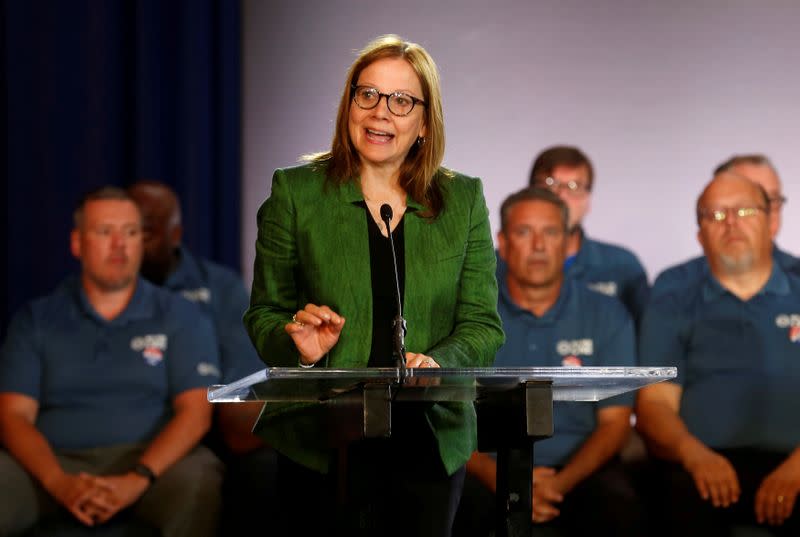 FILE PHOTO: General Motors Chairman and CEO Mary Barra makes a statement as members of the United Auto Workers bargaining committee listen at the start of contract talks between the union and automaker in Detroit

DETROIT (Reuters) – General Motors Co’s top executive on Friday said layoffs announced a day earlier at the company’s self-driving Cruise unit were “prudent” but insisted that she sees a “huge opportunity” for its vehicles to move both people and packages.

“We see a huge opportunity to move people and that same vehicle is very applicable to package delivery,” Chief Executive Officer Mary Barra said at a Bank of America investor conference. “We’ll continue to aggressively work on both.”

According to an internal email partially read to Reuters on Thursday, about 8% of Cruise staff would be cut, which amounts to more than 140 people.

The coronavirus pandemic has caused funding to dry up in the autonomous driving industry.

Speaking to Bank of America, Barra repeated previous statements that GM remains “unwavering in our commitment to Cruise.”

“I think what you saw them do was just a very prudent action,” she said. “The tightening they just did was in non-technical areas” to focus more on developing self-driving technology.

Earlier Friday GM’s chief financial officer said vehicle sales for the No. 1 U.S. automaker and the U.S. auto sector were trending in a positive direction as the sector recovers from the coronavirus pandemic.

“Early days, but we’re seeing some positive signs in the first two weeks of May on the retail side,” CFO Dhivya Suryadevara said during a webcast of a Goldman Sachs investor conference.

A GM spokesman confirmed she was speaking about both GM and industry demand.

Auto sales globally, including in the United States, were hurt as the COVID-19 virus shut down dealers, but markets have begun to reopen. GM is set to reopen “a majority of our operations” next week, Suryadevara said.

GM tracks vehicle sales on a daily basis and is in constant contact with its U.S. dealers, tracking things like changes in preference including the growing market share for pickup trucks, she said.

As for the restart scheduled for this Monday, some industry officials have worried that delays in Mexico could lead to U.S. assembly plants shutting back down due to a shortage of parts from south of the U.S. border.

“The situation will be fluid leading up to the restart,” she said. “It is clearly an interconnected system across U.S., Mexico and Canada that we’re working with all the governments and the stakeholders to bring confidence on the way we’re restarting and our safety protocols as well.”

(Reporting by Ben Klayman in Detroit; Editing by David Gregorio)