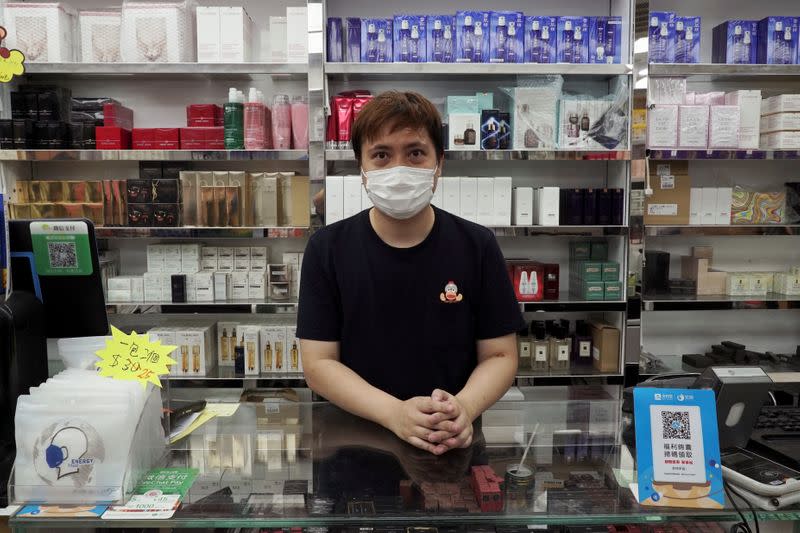 SHEUNG SHUI, Hong Kong (Reuters) – Last summer, pro-democracy protesters harassed Chinese traders in Sheung Shui and smashed storefronts that catered to them in the Hong Kong border town, angry at what they saw as a de facto invasion.

The protesters, many from elsewhere in Hong Kong, built on years of resentment by some locals who blame the cross-border traders for overcrowding the town and pushing up rents as they load up on cosmetics, milk powder and medicinal items to sell at a profit on the mainland.

Now, there are no traders and no protesters. The town has been quiet since Hong Kong effectively shut its border with mainland China in February to stop the spread of the new coronavirus. On some streets, three-quarters of stores primarily serving traders have closed.

The protesters got what they wanted. But it has left some of the locals with mixed feelings.

“It’s complicated to say whether the border closure is good or bad,” said Helen, a 22-year-old university student in Hong Kong who said she was frustrated with the traders.

She often argues about the issue with her parents, who run a herbal tea shop in Sheung Shui, she said: “They say if no people from the mainland shop here, we won’t have a business. You’ll have nothing to eat. You’ll have nowhere to live.”

Helen, who only gave her first name for fear of angering her parents, now has to sweep the shop’s floor because her parents’ mainlander employee cannot return.

Protests erupted across Hong Kong last year over perceived meddling by China’s communist authorities into the affairs of the semi-autonomous city, a charge which Beijing denies.

Anti-mainland sentiment found fertile ground in Sheung Shui, where discontent had been building for more than a decade – since border controls were relaxed – over the fast-growing cross-border trade that was overloading the town’s infrastructure, raising rents and disrupting everyday life.

Residents complained that the ‘parallel traders,’ as they are called, blocked sidewalks with their splayed suitcases as they repacked beauty products and baby formula, littered the streets, choked access to the train station and drove up prices in shops.

There were only three cosmetics shops in 2013, but 139 in January of this year, according to data collected by North District Parallel Imports Concern Group, which has lobbied to stop cross-border trading and “reclaim Sheung Shui” since 2012.

Only a few months ago, the town reverberated with the sound of rumbling trolleys and bargaining in Mandarin. But now it is quiet. On one block of a main street, seven out of nine cosmetics and baby formula shops had their metal security gates rolled down last week, some displaying ‘for lease’ signs taped over remnants of protest graffiti.

In the shops that are still open, employees sit idle by fully stocked shelves, and told Reuters their hours have been slashed.

Nick Suen, a 20-year-old anti-trader protester and waiter at a Sheung Shui restaurant decorated with pro-democracy posters, said the town he grew up in “feels like Hong Kong now.” With restaurant sales down about 70%, he said he was concerned about employment in the town, but freedom was more important to him than having a job.

David So said he supports the pro-democracy protesters, even though they damaged his Romantic Cat Cosmetics Store last year because it was popular with mainland traders. He said his sales have dropped 70% to 80% since the border closed.

“There are a lot of contradictions in Sheung Shui,” said the 35-year-old, sitting behind hundreds of unsold Korean shampoo bottles. “Our economy depends on Chinese capital, I admit. But as we keep earning money from China, they may try to change our thinking. We might need to obey their laws. That we don’t want.”

Sam Leung, the third-generation owner of his family’s bedding business, which caters mostly to locals, said he had to downsize because of rising rents caused by the traders.

But he said the recent economic devastation was a chance to start anew: “If there’s nothing, you can slowly build. We can adapt to a new model in Sheung Shui.”

Uber to report Q1 earnings with focus on pandemic's impact