Hungry Venezuela's crops rot in fields for lack of fuel 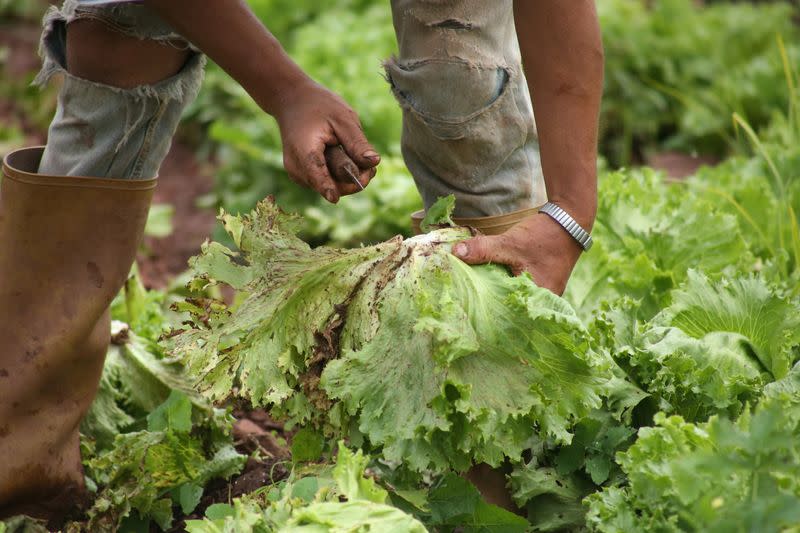 LA GRITA, Venezuela (Reuters) – With millions of people hungry in Venezuela, acute fuel shortages are forcing farmers to let crops rot in fields or feed them to livestock since they cannot transport food to market during the coronavirus quarantine.

Irrigation systems are halted in the western Andean highlands and laborers cannot get to fields for harvest. The fuel shortages have worsened in recent weeks as Washington has tightened sanctions on the socialist government of President Nicolas Maduro.

Even before the coronavirus crisis, some 9 million Venezuelans already were suffering from malnutrition, according to the U.N. World Food Programme, and the latest developments may make it increasingly difficult to keep the country in quarantine.

“I gave the lettuce to the cattle because it’s lost,” said Angel Mora, 55, a farmer in the agricultural hub of La Grita. “It makes me sad because this is our daily bread. We have to provide for our children and grandchildren.”

The 500 trucks that typically leave La Grita each week are now halted by quarantine and fuel shortages, leaving nearly 5,000 tonnes of food per week stranded in the highlands, said Robert Maldonado, who represents the region’s farmers.

The land around La Grita, a city of some 100,000 inhabitants near the border with Colombia, has for decades been a center of Venezuela’s fresh vegetable production.

Some growers simply leave crops in fields. Others sell goods at discounts to neighbors or donate them to churches that provide food for the poor, who have long struggled to feed themselves due to years of hyperinflation.

There are no official figures on how much food is being lost. The information ministry and state oil company PDVSA did not respond to requests for comment on food spoilage and fuel shortages.

Venezuela, which has reported 311 cases of coronavirus and 10 deaths, ordered a strict quarantine in March to prevent the spread of the disease.

“This is what humanitarian activists hoped to never see: a sanitary crisis on top of a nutritional crisis,” wrote Venezuelan nutrition expert Susana Raffalli on Twitter. “It hits us as the country does not have gasoline, protective equipment or a clear response to COVID-19.”

The United Nations has described Venezuela as one of the world’s most vulnerable nations to the disease due to its deteriorated health system and lack of running water and soap to maintain basic hygiene.

The OPEC country’s decrepit refineries are in near collapse and the U.S. State Department has pressured companies not to sell gasoline to Venezuela, according to sources, creating long lines at service stations around the country.

Maduro blames the fuel shortages and the economic problems on U.S. sanctions.

Venezuela’s heavy fuel subsidies have made it so cheap that drivers rarely bother paying for it when they fill up at PDVSA service stations.

But fuel on the black market now fetches upwards of $4 per liter ($15.72 per gallon), which farmers say would leave their shipping costs greater than the value of the merchandise.

Many find themselves stuck waiting in fuel lines with trucks full of fruits and vegetables that become damaged after hours under the hot sun.

Nelson Romero, 30, had to plow under an entire field of $11,000 worth of carrots because they had gone bad.

“This harvest was supposed to go to market, but for lack of gasoline there was no way to move it,” he said.

Some desperate potato growers in the nearby state of Merida have returned to their ancestral roots, loading oxen with sacks and walking them to market, said Gerson Pabon of the country’s potato growers association.

Around 50,000 tons of plantain – a crucial element of the Venezuelan diet – are at risk in the western Zulia state, according industry leaders.

Some have banded together to rent trucks to transport products to Maracaibo, Zulia’s capital and Venezuela’s second city. Others pool resources to buy fuel for transport.

On a small plot of land 15 minutes outside La Grita, 38-year-old Azael Duque on a Saturday morning was cutting up 2,000 celery plants whose leaves were wilting after too much time in the ground – meaning buyers would not accept them.

“It’s the first time I’ve lost a harvest because there’s no gasoline to transport it,” said Duque, swinging a machete at the damaged celery. “We’re worried, because there’s going to reach a point when we can’t sow, we can’t work.”

As Bitcoin price rises, institutions get down with digital assets