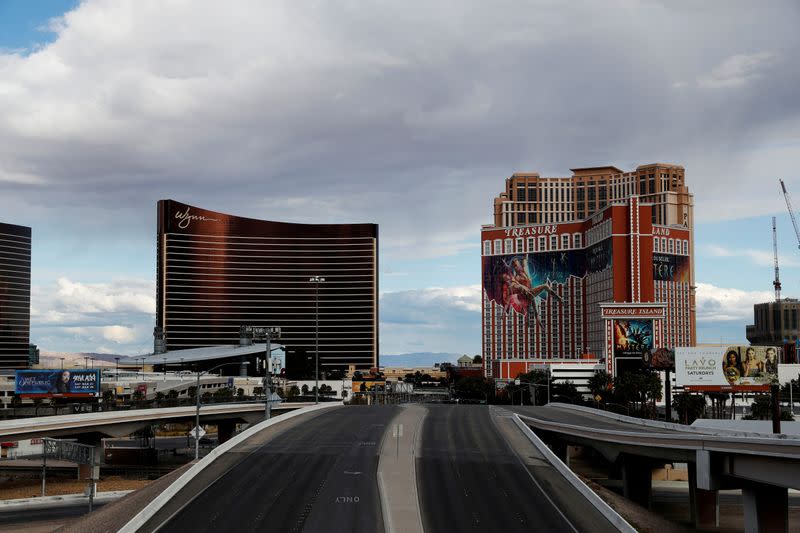 (Reuters) – The winking airport slot machines that tell visitors they have arrived in Nevada’s Sin City are turned off and wrapped in police tape; the famed Las Vegas Strip is so empty a group of bicyclists zooms down the middle on a Friday night.

Shutting down the businesses that make Las Vegas a multibillion-dollar gambling and entertainment hub has dealt a crushing blow to the state and idled tens of thousands of workers.

But with a dozen members dead and others sickened, the powerful union representing Las Vegas’ bartenders and casino employees, Culinary Workers, is not pushing for a fast-reopening.

Instead the union, which is influential with Democratic politicians who lead the swing state, is negotiating hard for safety measures and paid leave for workers sidelined by the virus.

“If I go back too early, I won’t be able to be alive to work,” said Olee Stewart, 59, a cook at Harrah’s Las Vegas Hotel and Casino, who is a member of the union. “When it’s safe for everyone, I think we should go back.”

The high-stakes negotiations between the 60,000-member Culinary Workers Local 226 and Nevada’s storied casinos echo talks taking place across the United States, as businesses, politicians and workers scramble to find a safe way to save lives without further destroying the U.S. economy.

The Culinary Workers union is asking casinos to pay employees who are idled by the pandemic and provide six months’ worth of health coverage to those who are laid off, according to a list of eight negotiating points seen by Reuters.

The union is also asking for paid sick leave and quarantine time to those who are ill or exposed to the virus. It wants enhanced cleaning for the casinos and training for employees who will have to use harsh chemical cleaners to sanitize gaming areas, guest rooms, kitchens and other areas.

“It’s a very, very tough situation for these workers,” said Geoconda Arguello-Kline, secretary-treasurer of the Culinary Workers local. “They have fears of losing a family member, the fear of getting sick and over that you have to be worried about getting your bills paid.”

The discussions in Las Vegas will likely leave the gambling hub – as with many parts of the country – a different place than before the virus hit, with Plexiglass separating dealers and players, and waiters possibly donning masks in restaurants.

The tension between companies’ need to reopen shuttered plants and union concerns about safety are also playing out in other industries.

Public health experts say it is far too soon to allow the kinds of mass gatherings that happen in a place like Las Vegas, where tourists jam casinos, restaurants and even the sidewalks. But the economic devastation wrought by public health orders closing businesses and forcing residents to shelter at home is also a powerful incentive to loosen the orders.

In Nevada, nearly 350,000 people have filed for unemployment benefits since the shutdowns began – a quarter of the state’s workforce, said Stephen Miller, director of the Center for Business and Economic Research at the University of Nevada, Las Vegas.

The shutdowns and slow return of tourism after the casinos reopen could lead to losses of 20% of the Las Vegas metropolitan area’s gross domestic product, or more than $20 billion, Miller said.

Democratic Governor Steve Sisolak has said casinos will likely not be allowed to welcome guests until the third or fourth phase of reopenings – which could be months away.

One unionized company, Wynn Resorts <WYNN.O>, has agreed to its union’s request to pay workers while the casinos are closed, the company confirmed.

But most others are not.

MGM Resorts International <MGM.N>, which owns several unionized Las Vegas casino resorts including the MGM Grand and the Bellagio, paid workers for the first two weeks of the shutdown and has offered grants to employees to help pay for rent, groceries and utilities, the company said. In financial documents filed last week with federal regulators, the company said it was effectively generating no revenue from its properties and would cut planned capital expenditures in half.

Sahara Las Vegas, another unionized property, is paying for employees’ healthcare premiums during the shutdown and has set up a fund to help those experiencing hardship, General Manager Paul Hobson said.

Once the casinos do reopen, they may look very different. The Venetian is considering installing Plexiglass barriers to separate guests from clerks helping them check in to the hotel, Reese said. Likely plans also include spacing out chairs on the pool deck, limiting traffic in elevators and making hand sanitizer widely available, he said.

Caesars Entertainment Corp <CZR.O>, which owns Caesars Palace, Harrah’s and the Flamingo, would not comment on union negotiations, but said it would follow the lead of state officials about when to reopen.

But Paula Larson-Schusster, a dealer and United Auto Workers member at the Flamingo, said plans to install Plexiglass barriers between dealers and players may not be enough.

Players will still have to shove their chips beneath the Plexiglass to play – and they are really dirty, she said.

“I’ve had people pick their nose and scratch their private parts and then they pick up the chips,” she said. “I’ve had people shoot NyQuil on the table because they’ve got the flu but since they’re in Vegas they’re going to play.”