In Brazil, delivery drivers for Uber, Rappi and others protest amid pandemic 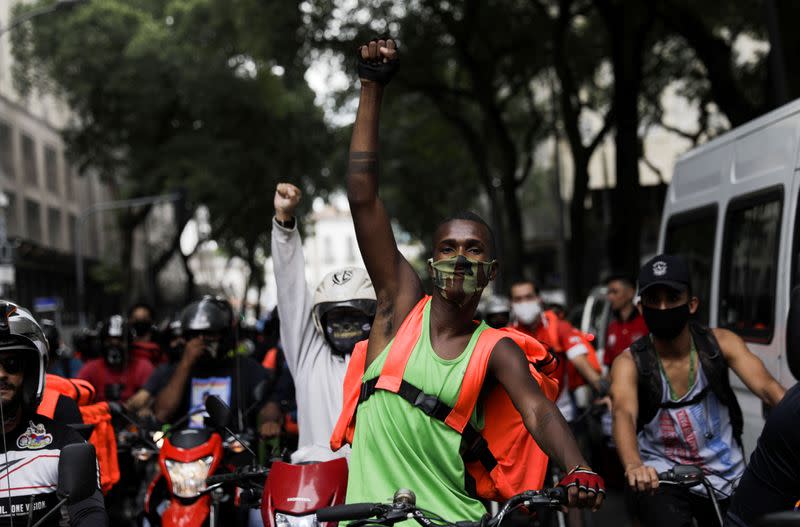 By Marcelo Rochabrun and Gabriela Mello

SAO PAULO (Reuters) – More than a thousand food delivery drivers on motorcycles gathered in São Paulo on Wednesday to protest their work conditions, set by Uber Technologies Inc and makers of other apps, as their services remain in high demand due to coronavirus lockdowns.

The drivers seek better pay and improved health measures, with Brazil now a coronavirus epicenter and delivery workers facing exposure to the virus.

The government said this week that about 50% of working-age Brazilians are out of work due to the coronavirus, as the crisis pushes more and more people into precarious employment options.

Lockdown measures have drawn more demand for delivered food in Latin America’s largest economy. Brazil’s iFood is the market leader, followed by Colombia’s Rappi and Uber, which are larger companies but more prominent in other countries. IFood said some of its users were ordering as much as 30% more deliveries now than before the crisis.

But drivers complained that the apps pay them less while making them work more, and that they face possible suspension if they do not comply. Several said the apps lure them with high pay at the beginning, which then dwindles over time.

“They are making us work weekends, every day, or we face the risk of getting blocked,” said Felipe Gomes, who delivers for iFood.

Amobitec, a trade group that represents iFood and Uber, said in a statement that competition among apps had become tougher during the pandemic, amid a “significant increase in delivery drivers,” but that the companies had managed to support many families during the crisis.

“The flexibility of apps was essential so that hundreds of thousands of people … had an alternative to generate income and support their families,” Amobitec said.

It was not the first time delivery workers have taken to the streets to demonstrate against Uber, Colombia’s Rappi and Brazil’s iFood. But the demonstration appeared to be the biggest.

Customers and restaurants took to social media to support the drivers, whose cause was a trending topic in Brazilian Twitter feeds.

Their working conditions have also drawn the attention of prosecutors, who have launched investigations of all the apps and sued iFood.

The companies classify drivers as freelancers, insisting the firms are intermediaries between restaurants and the delivery workforce. They say the apps provide workers with the freedom to set their hours and level of commitment. But workers and prosecutors strongly disagree.

“An algorithm determines everything for them: the value of the work, the duration of their work, even the route they should take, and if you don’t accept, there are penalties,” said Tatiana Simonetti, a Brazilian labor prosecutor.

IFood and Rappi said worker demands have been addressed and would not commit to raising pay in response to the pressure. Rappi said most workers receive 18 reais ($3.38) per hour, although drivers told Reuters they often receive much less.

Uber declined to comment, deferring to the Amobitec statement.

Rodrigo Gandolfo, iFood’s vice-president of logistics, said deliverymen get paid around 20 reais ($3.77) per hour at the busiest times, such as lunch and dinner.

“It’s hard to talk about making structural changes,” Gandolfo said. “We can talk about constant improvement, but the majority of driver demands have already been covered by iFood.”

The protests were to continue into the night, with the delivery workers riding their motorcycles through the city while wearing the branded backpack containers bearing the companies’ logos.

Will hybrid working lead to a generational divide in the office?

Inflation concerns are nibbling at sentiment