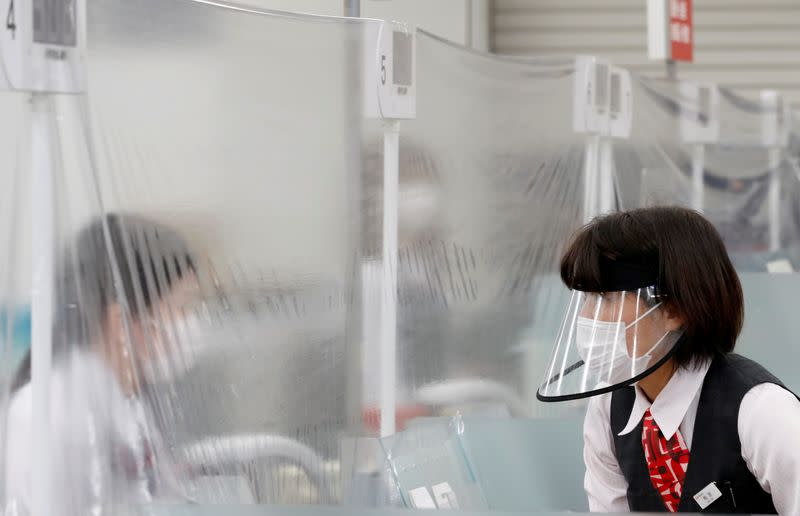 TOKYO (Reuters) – Japanese retail customers’ love affair with cash – and some extra free time while working at home – is keeping bank branches busy despite government calls for people to reduce contacts during the state of emergency to contain a coronavirus outbreak.

Japan does not have a mandatory lockdown, but Prime Minister Shinzo Abe declared a state of emergency for seven prefectures including Tokyo on April 7, urging people to cut person-to-person contacts by 70% to 80% and work at home as much as possible.

The emergency was expanded nationwide on April 16.

In some residential areas, branches have even seen an uptick. MUFG figures include ATMs, while SMFG numbers do not.

Japan has not seen the explosive outbreak of infections seen in many other countries, but had 13,444 confirmed cases and 373 deaths as of Monday, according to public broadcaster NHK.

A Japanese preference for cash, especially among its large ranks of elderly, appears to be one reason for the busy banks.

Japan is one of the most cash-based economies in the advanced world, government statistics show, with its cashless ratio below 20% against 96% in South Korea and 66% in China.

Working at home has also given some employees time to slip out to the local bank branch.

“I have more free time now after my company introduced telework,” said Kanoko Nakashima, 56, who visited the MUFG branch in Tokyo to get a new bank book after noticing her old one was filled up.

Many Japanese are wary of online banking, and prefer to keep transaction records in their paper bankbooks.

Japanese firms have expanded telework since the virus outbreak. About 40% of 1,158 employees surveyed by the NTT Data Institute of Management Consulting in April said their companies had introduced remote working, up from 18% in January.

Japan’s three largest lenders – MUFG, SMFG and Mizuho – have all said they would keep their bank branches open as a vital part of social infrastructure.

The banks have taken measures against coronavirus infections, such as placing a plastic curtain at the counter and making staff wear a face guard while speaking to customers.

U.S Mortgage Rates Rise but Remain Well Below the 3% Mark

Rolling with the changes: Bridgestone America’s CEO on leadership now