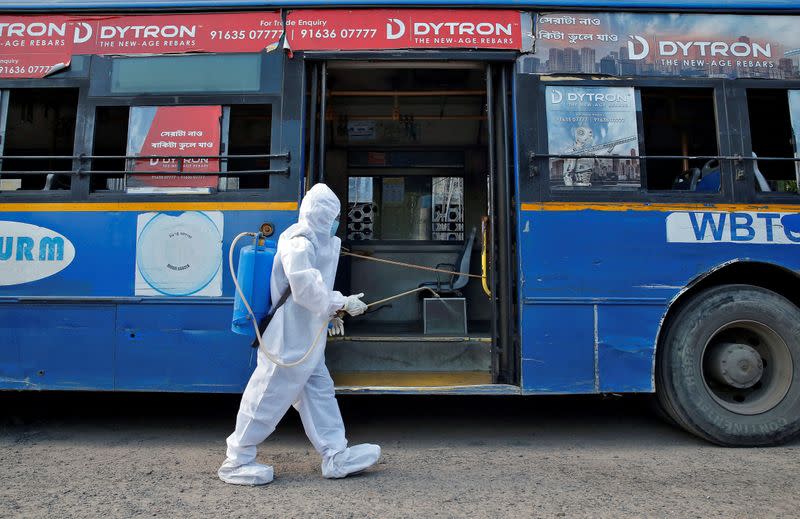 By Devjyot Ghoshal and Sankalp Phartiyal

NEW DELHI (Reuters) – India’s capital New Delhi and some other state governments ordered the re-opening of public transport on Monday in a further easing of a nearly two-month coronavirus shutdown.

Under the new rules, buses, taxis and three-wheelers will return to the streets but with restrictions. Buses will not carry more than 20 passengers, each of whom will be screened before boarding, Delhi Chief Minister Arvind Kejriwal said.

“Corona will stay, and we will also survive,” Kejriwal said, outlining the new guidelines for the city of 20 million people that has one of highest numbers of coronavirus cases in the country.

However, a factory of the Chinese smartphone maker OPPO near Delhi suspended operations after six workers tested positive for the coronavirus.

The factory had received government permission to resume limited production as part of a gradual relaxation of the shutdown that began on March 25.

But when OPPO tested workers prior to the restart, six tested positive for COVID-19, said Deep Chandra, senior official at the Greater Noida Industrial Development Authority.

OPPO said in a statement that operations at the plant were suspended and it would only allow employees with negative test results to resume work.

Karnataka, home to technology hub Bengaluru, also lifted some restrictions on the movement of trains, taxis and buses within the state. Transportion from outside the state will remain suspended except for essential services.

Experts say that coronavirus cases will rise in coming weeks as India’s lockdown is eased, and authorities have repeatedly told companies resuming operations to ensure that social distancing and other measures are taken to prevent infections.

India has seen a rapid rise in coronavirus infections in recent days, with confirmed cases at around 96,000 and more than 3,000 deaths, according to federal data.

On Sunday, Prime Minister Narendra Modi’s government extended the nationwide lockdown to May 31, but relaxed rules in areas with lower numbers of cases and allowed state governments to issue their own guidelines on some matters.

With the restrictions eased, some traffic poured back onto the roads of the capital, and hairdressers, beauty parlours, stationary shops, and butchers were among the small businesses reopening elsewhere in the country.

But schools, malls and other public places will remain mostly closed, and large gatherings are still prohibited.

Compounding the challenges for the country, hundreds of millions of migrant workers have been stranded across India for weeks, unable to return home after authorities banned all transport services in late March.

After a series of road and rail accidents, where dozens of workers died, authorities are now increasing efforts to help them home.

In Chennai, construction worker M.D. Rustom queued along with hundreds of others for a bus and train trip back to Bihar, some 2,000 km away.