'It's up to us': how Merkel and Macron revived EU solidarity 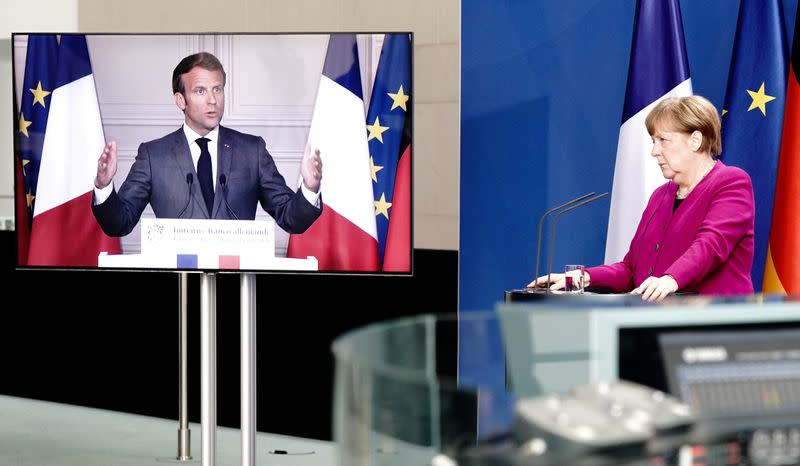 By John Chalmers and Gabriela Baczynska

BRUSSELS (Reuters) – It took a courtroom of scarlet-robed judges to spur Angela Merkel to make one of her boldest moves in 15 years as German chancellor: propose huge cash handouts to the European Union’s weaker economies.

Merkel was already worried about the future of the Union after the coronavirus pandemic struck Europe in February, triggering a wave of deaths and crippling lockdowns.

But it was Germany’s own Constitutional Court that tipped her hand, sources said. Its bombshell ruling on May 5 challenged the EU’s reliance on European Central Bank (ECB) money-printing to keep its weaker members’ economies afloat – and the EU’s governance.

Until then, Merkel had opposed a proposal by French President Emmanuel Macron for a Recovery Fund that would, for the first time, bind all 27 member states to raise debt jointly.

“Initially they were on quite different positions,” said one senior diplomat. “They reviewed the risk of a split in the EU. But then the Constitutional Court decision came and Merkel … said: ‘It’s up to us, the governments’.”

A series of video calls between Merkel and Macron led to a plan for the European Commission, the EU executive, to borrow 500 billion euros ($550 billion) as common debt and transfer it to the regions and industries hit hardest.

Diplomats in Brussels, Paris and Berlin familiar with the discussions said Merkel had dropped Germany’s long-held opposition to mutualising debt to fund other member states – when it became clear the EU itself was in peril.

The court ruling in effect put the onus on EU governments themselves to fund any fiscal response.

European leaders agree that, if they fail to rescue economies now in freefall, they risk something worse than the debt crisis 10 years ago – which exposed faultlines, fanned euroscepticism and almost blew up the eurozone.

UNION IN NAME ONLY?

The pandemic has derailed the recovery of the EU’s most indebted countries. Italy’s debt is shooting towards 170% of national output, Greece is losing gains wrung from years of belt-tightening and, across the south, a collapse in tourism threatens millions of jobs.

Surely the moment for the Union to live up to its name.

But members’ initial slowness to share medical equipment, and readiness to close their borders, seemed to demonstrate Brussels’ irrelevance when national interests are at stake.

Divisions erupted at an all-night videoconference of EU leaders on March 27 as fiscally conservative northern countries resisted pressure from a “Club Med” group to raise a splurge of mutual EU debt to tackle the effects of the pandemic.

Finance ministers agreed on April 9 to an EU-wide rescue plan worth half a trillion euros, but it was too little to fund long-term recovery, and the feud festered on. Berlin insisted any recovery plan must consist of short-term, repayable loans.

Then Merkel and Macron began talking.

“Merkel became increasingly aware that it was making Europe look really bad,” said an EU official familiar with Macron and Merkel’s consultations with the Commission.

Just when it seemed that this latest in a series of traumas, from sovereign debt crisis to a chaotic wave of migration to Brexit, could finally tear the bloc apart, the deal hints that the two founder members can still provide the EU’s steady core.

It may also boost Macron’s standing and his vision of more integration as Merkel ends her long tenure.

The Commission, which presents its own proposal on May 27, warmly welcomed the initiative, but the deal is not yet done.

To pass, it needs backing from all 27 capitals, and Austria’s leader has already said that he, along with the Netherlands, Denmark and Sweden, will offer only loans, not grants.

(Additional reporting by Michel Rose in Paris and by Andreas Rinke in Berlin; Editing by Kevin Liffey)

Ethereum price spikes to $1,161 for the first time in three years: What’s next?