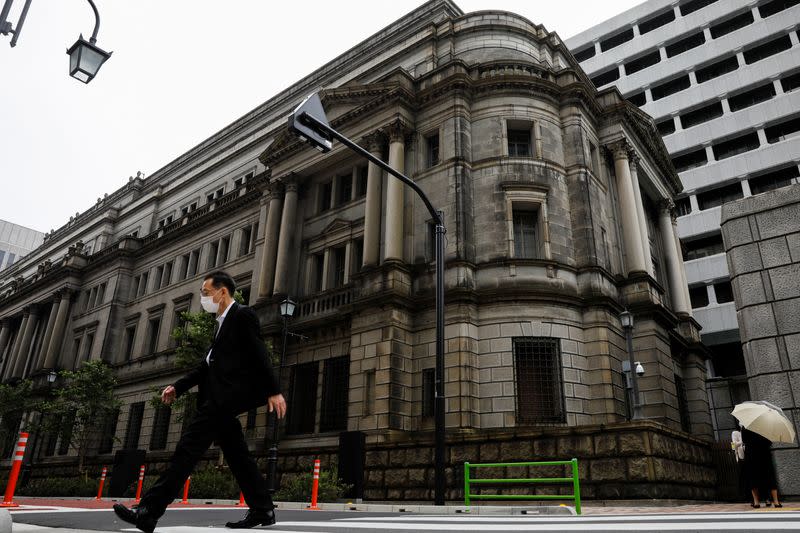 By Leika Kihara and Tetsushi Kajimoto

TOKYO (Reuters) – Japan’s central bank unveiled its own version of the U.S. Federal Reserve’s “Main Street” lending programme on Friday, to channel nearly $280 billion to small businesses hit by the coronavirus and stop the economy sliding deeper into recession.

At an emergency meeting, the Bank of Japan also extended by six months the deadline on a series of measures put in place earlier this year to pump cash to struggling firms.

The decisions came shortly after data showed Japan’s consumer prices returning to deflation for the first time in three years.

With the line-up of credit easing steps launched so far, the BOJ hopes to pump at least 75 trillion yen ($697 billion) into an economy that is on course for its deepest postwar slump.

“I’d give a passing mark both in terms of the size and duration of the measures.”

Friday’s moves underscore concerns in Tokyo that the pandemic could lead to a spike in bankruptcies and job losses without stronger steps to pump credit to cash-strapped firms.

As widely expected, the BOJ kept unchanged its short-term interest rate target of -0.1% and a pledge to guide 10-year government bond yields around 0%.

Japan slipped into recession for the first time since 2015 in the last quarter, as coronavirus lockdown measures crushed consumption and business activity.

The BOJ eased monetary policy in April by ramping up risky asset purchases and pledging to buy unlimited amounts of government bonds to cushion the economic blow from the pandemic.

Under the new lending scheme, first flagged last month and finalised on Friday, the BOJ will pump around 30 trillion yen ($279 billion) to commercial banks that lend to small firms using funding-aid programmes launched by the government.

The central bank would also pay 0.1% interest to banks that boost such lending. It will start offering the loans from June.

The BOJ’s new scheme borrows many elements from the Fed’s “Main Street Lending Facility,” which aims to support lending to small firms with investment by the U.S. Treasury Department.

Like the Fed’s programme, the BOJ’s scheme essentially uses government guarantees to cover any losses that emerge if loans to small businesses go sour. Commercial banks can thus boost lending without fear of being saddled with bad loans, and even get paid interest for borrowing money from the BOJ.

The central bank on Friday also extended to March 2021 emergency relief announced in March and April. Those measures include ramped-up purchases of corporate bonds and commercial paper and zero-interest loans offered to commercial banks against a range of collateral.

Most steps the BOJ has taken so far are directed at big firms that have better access to bank loans and credit markets.

The challenge for the BOJ has been to extend the reach to small businesses that quickly run out of cash once sales slump.

The BOJ’s decision underscores how the central bank is forced to work closer than ever with the government to cushion the economic blow from the crisis.

With interest rates already below zero and various schemes in place to pump out cash, the BOJ may have exhausted its ammunition, some analysts say.

“There’s nothing left for the BOJ to do next month except to check on whether the new scheme is functioning properly, and do some fine-tuning if necessary,” said Maruyama of SMBC Nikko Securities.

“The BOJ will likely stand pat at least until 2021, unless a second wave of infection inflicts huge damage to the economy.”

This week in Bidenomics: A bridge to somewhere