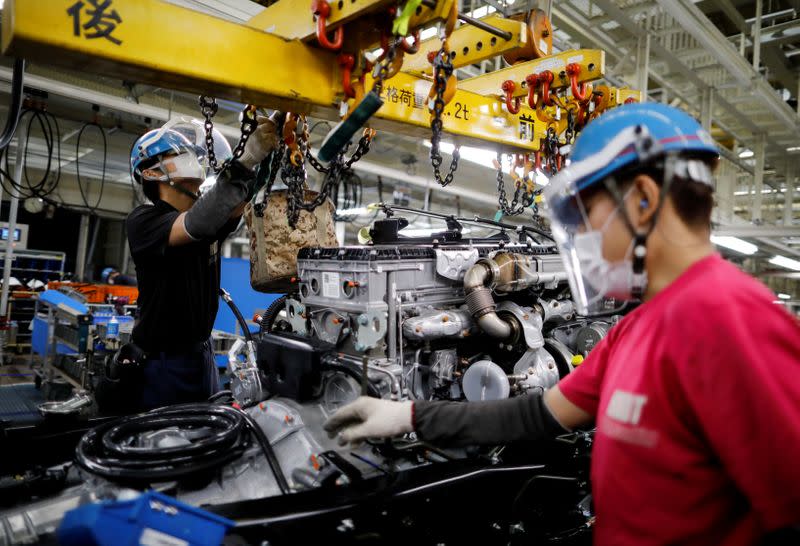 FILE PHOTO: Employees wearing protective face masks and face guards work on the automobile assembly line during the outbreak of the coronavirus disease (COVID-19) at the Kawasaki factory of Mitsubishi Fuso Truck and Bus Corp. in Kawasaki, Japan

The monthly poll, which tracks the Bank of Japan’s key tankan quarterly survey, found that sentiment at manufacturers dropped to minus 46 in June from minus 44 the previous month, remaining at the lowest since June 2009, while the service-sector gauge edged up to minus 32 from minus 36.

Both manufacturing and service-sector firms expected slightly less pessimistic conditions in the three months ahead, the survey found, though the slow pace of improvement casts doubt on the BOJ’s somewhat rosier economic outlook.

The Reuters Tankan index readings are derived by subtracting the percentage of respondents who say conditions are poor from those who say they are good. A negative reading means that pessimists outnumber optimists.

“Orders have fallen to around 70% due to global economic stagnation caused by the spread of the new coronavirus,” a manager at a transport equipment maker wrote in the survey.

The autos and transport equipment sector dropped to minus 80, underscoring the sharp contraction in Japan’s exports.

A manager at a real estate firm said: “Business conditions are extremely poor as housing acquisition sentiment was sluggish after the sales tax hike, and new business didn’t hold up due to the coronavirus.”

The survey showed manufacturers’ sentiment in September at minus 35 and that of service-sector firms at minus 29 as some respondents saw improving conditions in the electronics sector.

“Demand for semiconductors, especially for memory, is expanding,” a manager at an electrical machinery maker wrote in the survey.

The BOJ kept monetary settings steady at its policy meeting on Tuesday, sticking to its view the economy will gradually recover as the pandemic subsides in the latter half of the year.

“Board members agreed that Japan’s economy is expected to improve in the somewhat long run as the impact from the pandemic subsides,” BOJ Governor Haruhiko Kuroda told reporters on Tuesday.

“Our view on the economic outlook hasn’t changed much since April. But there is strong uncertainty on the outlook.”

The central bank made no major changes to a range of programmes put in place to channel funds to businesses, adding it expects to pump around 110 trillion yen ($1 trillion) to the economy via its market operations and lending facilities.

Except for the information/communications sector, all industry categories across manufacturing and services were gloomy about business conditions, according to the poll of 499 large- and mid-sized non-financial companies, of which 240 firms responded on condition of anonymity.

AT&T is sued for $1.35 billion over technology to synchronize smart devices