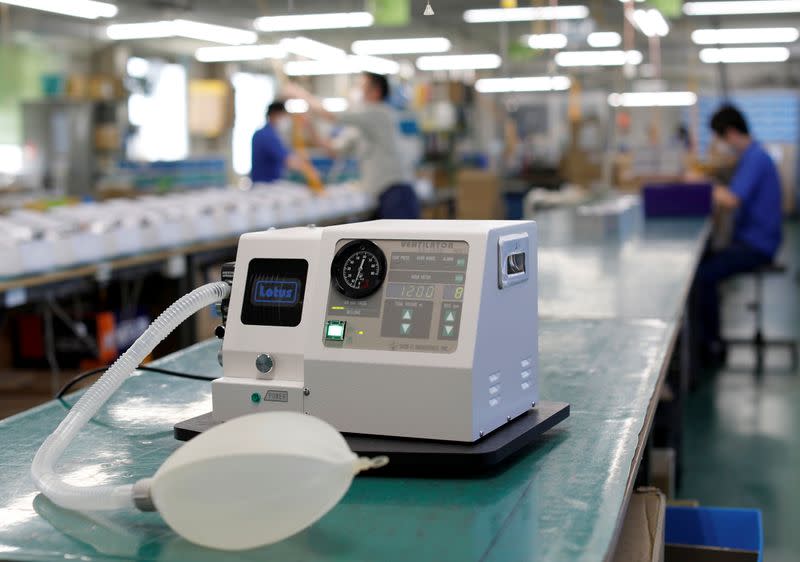 A unit of Sanko Manufacturing Co.’s ‘Lotus SS-1200’ ventilator, is seen as the spread of the coronavirus disease (COVID-19) continues at the factory in Saitama

By Tim Kelly and Maki Shiraki

TOKYO (Reuters) – Japanese Prime Minister Shinzo Abe has pledged to build 2,000 new ventilators for coronavirus patients that even the government says hospitals are unlikely to need.

Instead, the plan, announced in April, appears to be more about bringing home manufacturing of equipment seen as key to the country’s national security, a long-held focus for the Japanese premier that has deepened with the coronavirus crisis.

Abe wants Japanese companies to build 2,000 ventilators to add to an unused stock of 4,700 already in hospitals. A further 8,300 are deployed in critical care units, of which only a fraction are used to keep COVID-19 patients alive.

But even the health ministry acknowledges that hospitals, which now buy almost all their ventilators overseas, likely have enough, while industry experts say Japan’s small ventilator-makers will struggle to produce more than the few dozen a month they usually build.

“It is probably more than Japan needs now,” said Akihisa Maeda, an official at the Ministry of Health, Welfare and Labour who is responsible for medical device policy, about the number of ventilators. “It is true there aren’t enough qualified people to operate them.”

Abe’s plan shows how the coronavirus crisis is spurring political concern about the potential vulnerability of overseas supply lines. Japan is also offering firms money to shift production of face masks and other products from China.

Japan needs to cut dependence on imports from the United States, Europe and China, said the health ministry’s Maeda.

“It’s a matter of national security. The coronavirus outbreak has shown that.”

Ventilators are used to inflate the fluid-filled lungs of critically ill COVID-19 patients through a tube inserted into the windpipe, and require constant monitoring.

Yet so far, only around 5% of seriously ill COVID-19 patients in Japan need the procedure known as intubation, a panel of experts has said. In early May there were 4,500 hospitalised cases, meaning roughly 270 were on ventilators. In Japan just under 800 people have died.

“It’s like building fighter jets without having pilots,” a leading intensive care specialist said about the government’s plan. Every new ventilator needs health professionals who are in short supply, he said, asking not to be identified.

Ventilator makers require technicians to ramp up production, but even with additional manpower, they still need to find components overseas amid strong international demand.

“My first thought was, it’s going to be tough to get the parts,” said Akikazu Endo, sales and marketing manager at ventilator maker Sanko Manufacturing, about the government’s plan.

At its small plant next to a vegetable field an hour by train from Tokyo, Sanko is making coronavirus ventilators with parts from human anaesthesia machines and ventilators designed for cats and dogs.

It usually hand builds around 30 ventilators a year, and initially proposed to build 300. It later scaled that back to 50.

Sanko buys electronic boards from China and will have to wait as long as six months for more, Endo said. Ministry of Economy, Trade and Industry officials, who visited Sanko, connected it with a Japanese company that can build the same part, but conducting tests will take time and money, he said.

“We can’t be in a situation where we run out of ventilators,” a METI official told Reuters.

Nihon Kohden, which builds 30 ventilators a month, is aiming to manufacture 1,000 within six months. It is still in talks to secure parts, a spokeswoman said.

“Companies tend to see ventilators and other invasive medical devices as too much of a gamble,” an official at the Japan Association of Medical Devices Industries said.

Speaking as head of the Japan auto industry lobby, Toyota president Akio Toyoda said automakers wanted to take a back seat by providing manufacturing know-how, saying it was “not easy” to make products that so directly affect human life.

An auto executive told Reuters the industry had other concerns.

“We are willing to cooperate, but it’s a small and risky market,” the executive said, asking not to be identified.

A Sony spokesman said it won’t be responsible for ventilator design or development. Nissan said nothing had been decided.

The health ministry’s Maeda said there’s no deadline for Japan Inc to deliver.

“Our aim is to achieve a balance between imports and those made locally.”

How to Double Your Money in 10 Years