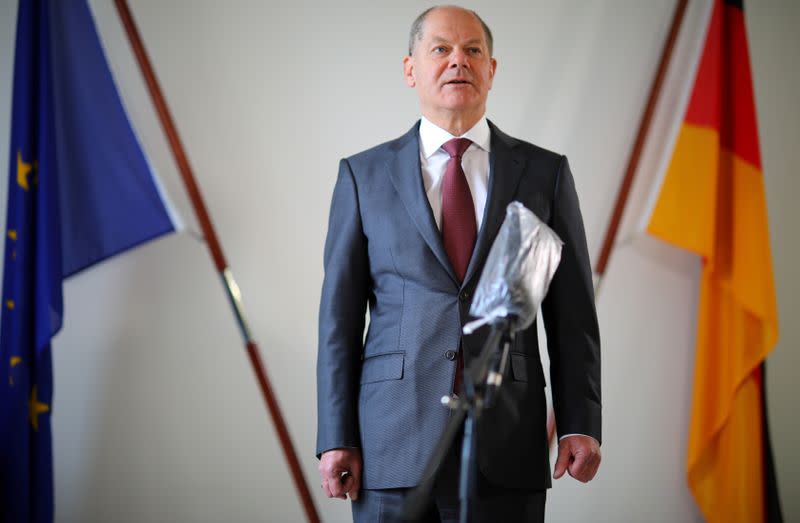 BERLIN (Reuters) – Four months is an eternity in pandemic politics. As recently as February, Finance Minister Olaf Scholz was Germany’s Mr Thrift, a devotee of the “black zero” balanced-budget rule.

Since then he has jettisoned the country’s deep-rooted fiscal conservatism and outstripped more freewheeling European allies to push for its biggest debt-financed stimulus package during peace time. On Wednesday, Scholz will present a supplementary budget that pushes up new debt to a record 218.5 billion euros this year – equal to about 6.5% of German output.

Even his tone and language has marked a departure for the usually reserved and technical Scholz, who pledged to use a “bazooka” to help struggling companies and get Europe’s largest economy out of the crisis “with a ka-boom”.

The pandemic has reversed his fading political fortunes, according to three government officials, a parliamentary budget source and a member of the leadership team of his Social Democratic Party (SPD). This has allowed him to gather support from the left of the coalition government without being seen to betray the fiscal orthodoxy of the right, they said.

It has even put the 62-year-old in the running to become the next German leader.

“The coronavirus crisis is giving Scholz new momentum. He can implement a policy shift without violating his own principles,” said a senior government official and veteran member of Scholz’s SPD.

This momentum is also making its mark on Europe, according to the sources, who declined to be named due to the sensitivity of the matter.

Scholz sees the turmoil as a window of opportunity to advance his long-term goals, they said: strengthening EU integration and making a big leap towards a closer fiscal union, at a time when the bloc’s cohesion is threatened by Brexit and challenges from the United States and China.

Such ambitions seemed unlikely at the end of last year when Scholz suffered the biggest political defeat of his career, losing the race to become leader of the SPD, which governs in coalition with Chancellor Angela Merkel’s conservatives.

Now, though, Scholz has no serious rival standing in his way to become his centre-left party’s candidate to replace Merkel in an election next year.

However political analyst Lucas Guttenberg, deputy director at the Jacques Delors Centre in Berlin, cautioned that the fiscal shift that has boosted Scholz’s standing at home and abroad could be temporary.

“Calls for belt-tightening both domestically and in Europe will re-emerge as soon as the immediate crisis fades,” he said.

Such a reversal could see longstanding criticism of Scholz resurface, including those from the SPD left, which accused him of mimicking the fiscally prudent policies of his conservative predecessor Wolfgang Schaeuble and said his apparent lack of emotion alienated voters.

When asked to comment for this article, Scholz’s spokesman said the minister’s recent fiscal change of tack was entirely consistent with his support of the Keynesian theory of counter-cyclical spending – taking on new debt in a downturn and reducing the debt burden during good times.

“Use your full strength in a crisis and use it quickly,” he added.

Indeed, in a Reuters interview about the balanced budget last October, he insisted he saw no need to take on new debt, as weaker growth was still growth – but he also said, presciently as it turned out, that he would go all-in if a crisis struck.

“Scholz can style himself as a competent, decisive crisis manager now while putting Berlin’s fiscal policy upside down,” another official close to Scholz told Reuters, adding that the finance minister was liaising closely with Merkel on the matter.

The fiscal U-turn is supported by Merkel, who managed to convince budget hawks in her own conservative camp to drop concerns and back massive deficit-spending to fight what is forecast to be Germany’s deepest economic recession since the end of World War Two, a third official said.

“Nobody here talks about the black zero anymore,” the person said in reference to the balanced-budget goal devised by Schaeuble and diligently adhered to by members of Merkel’s bloc.

Scholz has gone down well with the public too, with polls ranking him as the second-most popular politician after Merkel.

On the European level, Scholz was involved in a Franco-German plan for a European Recovery Fund to enable the European Commission to take on joint debt of 500 billion euros and channel the money to member states worst hit by COVID-19.

While the decision was publicly announced by Merkel and French President Emmanuel Macron last month, Scholz was one of the architects of the agreement behind the scenes, according to a senior diplomat from a southern EU country.

Southern states like Italy and Spain have been hit hard by the novel coronavirus and have been pushing for Germany to loosen its fiscal conservatism to help them weather the crisis.

Scholz is also in favour of allowing Brussels to obtain its own revenues through a financial transaction tax or the emission trading scheme.

One of the officials close to Scholz said he wanted to deepen EU ties, and for the bloc to experience its “Hamiltonian moment” – a reference to Alexander Hamilton, the first U.S. Treasury Secretary who pooled fiscal powers at a federal level in the late 18th century to generate common revenues and to create independent debt capacities.

Analyst Guttenberg noted that in recent years Germany had shown little interest in bolstering European cooperation and ties. “It is very good news that this has changed in the face of the sheer depth of this crisis,” he added.

Scholz, who became vice chancellor and finance minister in 2018, has assembled a network of allies at the ministry, a colossal stone building in Berlin dating from the Nazi era.

Scholz is a master of surrounding himself with top people who share his vision and complement his skills, said one of the officials close to the finance minister.

The pandemic has aided his ambitions to become the SPD’s chancellor candidate by dissolving some of the most contested issues within the party.

With the balanced budget gone and Germany’s debt brake suspended, the pandemic has removed the biggest hurdle for Scholz to be supported by the SPD’s left wing, a member of the party’s leadership team said.

The senior SPD member, who describes himself as a critic of Scholz, said the finance minister had done an “impressive job” during the crisis, and that his chances of becoming the party’s next chancellor candidate were high.

He added, though, that Scholz’s inability to connect with voters remained a weakness: “His talk about bazookas and ka-boom is actually a bit clumsy. You can’t change the way you think, talk and act, just like that.”

Bank of America Predicts ‘Mother of All Bubbles’ for Bitcoin