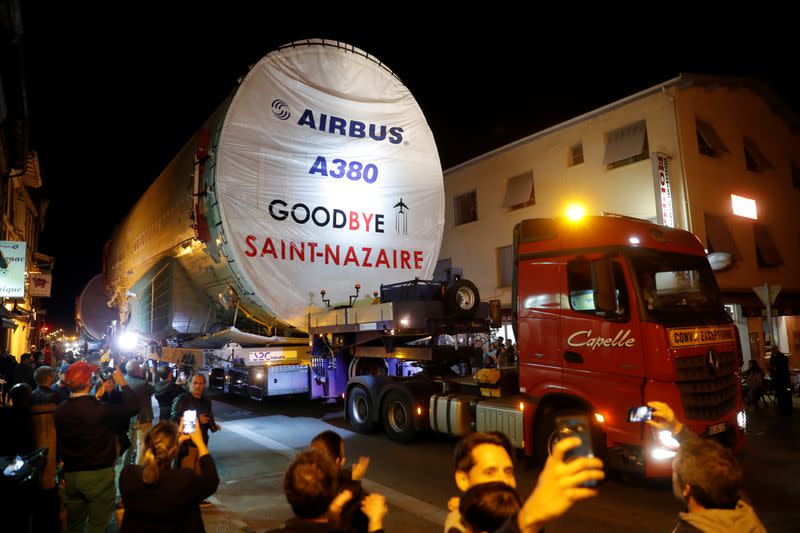 By Tim Hepher and Stephane Mahe

LEVIGNAC, France (Reuters) – The last convoy of outsize parts for the world’s largest airliner crawled towards an assembly plant in southwest France late Wednesday, applauded by residents and production workers as Europe’s Airbus prepares to build the last A380 superjumbo.

Trucks carrying three fuselage sections squeezed through the rural village of Levignac on their way to Toulouse, where the final superjumbo will be assembled before the model ends production in 2021, just 14 years after entering service.

Faced with weak sales of the four-engined behemoth, beaten on efficiency by smaller jets like the Airbus A350 and Boeing 787, Airbus announced the early halt last year.

“It has made the region live, together with all the villages round here and the people who built it. It’s magnificent,” said Christiane Inard, who has watched almost 300 convoys creep past her living room since the first in 2004.

Airbus still has record orders for smaller jets, but the A380 is winding down just as Europe’s aerospace capital faces wider job pressures due to the coronavirus crisis.

“It hurts my stomach seeing something stop just like that; it’s difficult for employment, for the young people,” Inard said.

One truck bore the sign “Goodbye Saint-Nazaire,” the name of the French plant where some sections are pre-assembled.

“It was hard,” said Peggy Jounier, 41, who placed the red nose on the last front section in Saint-Nazaire.

Airbus had bet billions on its vision of 555-seater jets. And without the A380, executives argued, Airbus would not have been able to knit a consortium of France, Germany, Britain and Spain into one European entity.

A380 industrial problems forced Airbus to learn tough lessons, which helped the company built the A350 broadly on time, with few hitches.

“This is an aircraft that brought all four European partners together and was an accelerator of Airbus,” said programmes head Philippe Mhun. “We are all convinced that Airbus would not be what it is today without the A380.”

Financial Guru Dave Ramsey Advises Whether One Should Invest in Bitcoin, Other Cryptocurrencies