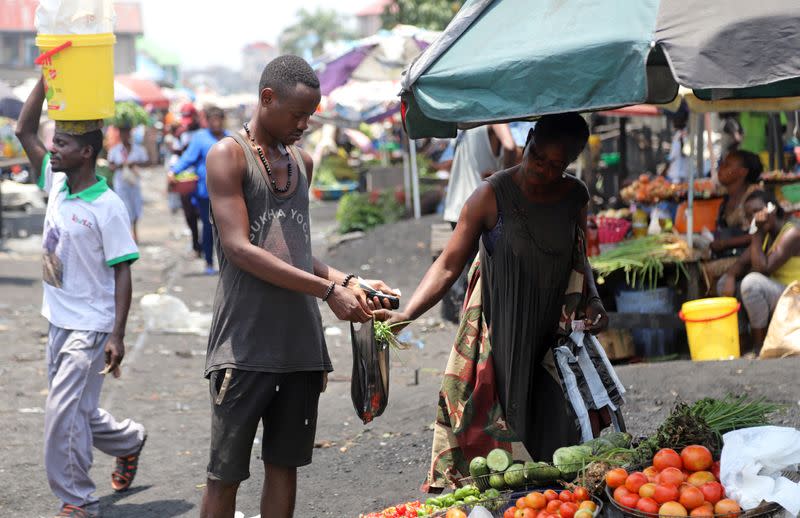 FILE PHOTO: A Congolese man buys groceries at an open air market, amid concerns about the spread of coronavirus disease (COVID-19) in Kinshasa

KINSHASA (Reuters) – Eight weeks after the Democratic Republic of Congo recorded its first case of the new coronavirus, Kinshasa’s main food market still has plentiful stocks of tomatoes, aubergines and other produce for the crowds of masked shoppers.

But higher prices chalked behind some stalls in the capital point to what the United Nations and government officials have condemned as unscrupulous profiteering at a time of crisis.

One shopper, Mireille, was stockpiling tomatoes in case prices spiral further, as they did in the run-up to the government’s abortive attempt to implement a city-wide lockdown on March 28 to curb the coronavirus.

Almost overnight, a bowl of tomatoes doubled in price to 500 Congolese francs, around $0.30, she said.

Price-gouging by some traders forced the government to abandon the policy and implement a more limited confinement in downtown Kinshasa at the epicentre of the outbreak.

So far, Congo has recorded more than 600 COVID-19 cases, including over 30 deaths.

“Today I am buying more tomatoes and I will keep them in the freezer because tomorrow everything can go up,” Mireille said.

Reeling from decades of conflict, Congo is already the second most food-insecure country http://www.fao.org/fileadmin/user_upload/emergencies/docs/FAO%20DRC%20sit%20update_April%202020.pdf in the world, according to the U.N. Food and Agriculture Organisation (FAO).

With 80 million hectares of arable land, the country has the potential to feed almost a quarter of the world’s population, two billion people https://www.wfp.org/countries/democratic-republic-congo, according to the World Food Program (WFP).

But with only 10% of its arable land cultivated and its infrastructure in ruins, Congo relies heavily on food imports.

Its existing food systems and the livelihoods of smallholders and vulnerable people are likely to be heavily impacted in the longer term by restrictions on movement due to the epidemic, the FAO warned in an April report.

The more recent increases in food prices have been driven by trader speculation, combined with panic-buying and increased transport costs, an FAO spokesman told Reuters.

“A few bad faith Congolese, mostly resellers, used this to play around with prices in markets,” said Tripo Losel, an advisor at the ministry of finance.

Authorities have raided warehouses and will try to regulate food stocks and prices, he said.

The central bank said on Thursday the country will slip into recession this year for the first time in almost two decades, and forecast inflation more than doubling to 9.9% compared to 2019.

Andreessen Horowitz Has Its Own Media: So Far That’s a Good Thing