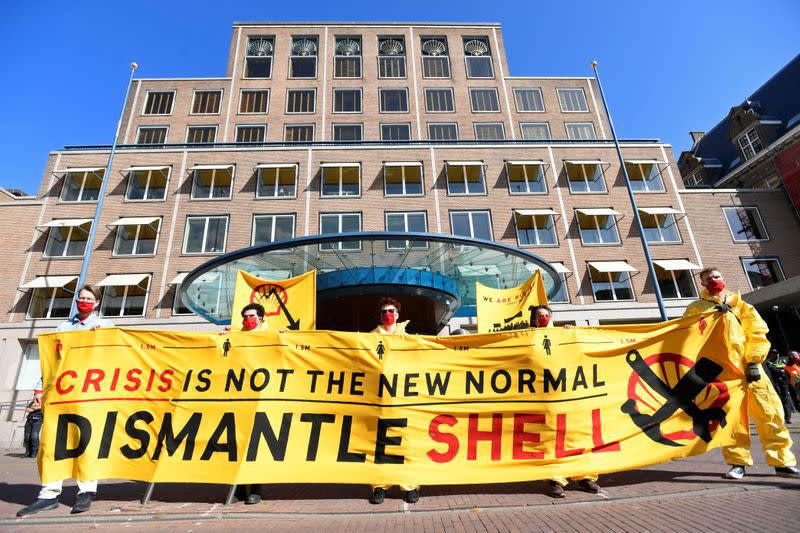 Protesters shout during a demonstration outside of the Shell headquarters, in The Hague

THE HAGUE (Reuters) – Dozens of demonstrators chanting “Shell must fall” gathered on Tuesday outside the oil giant’s headquarters in the Netherlands, where a virtual annual shareholders’ meeting was underway.

Hundreds of activists had signed up to attend, but Dutch authorities allowed no more than 30 due to coronavirus distancing measures.

During the shareholders’ meeting, some large investors were expected to press the company for more concrete action to reduce its environmental footprint and meet the Paris climate goals.

Dozens more protesters, many wearing face masks to prevent the spread of COVID-19, demonstrated outside the nearby national parliament building and city hall.

A dinosaur made of oil drums was erected outside Shell’s headquarters and protesters held banners that read “fossil energies belong in museums” and “climate change final call: Shell must fall.”

Greenpeace called for an end to investments in fossil fuel.

“Shell and its investors must now take responsibility. Shell has earned billions from oil exploitation, now these dirty investments must come to an end,” said Greenpeace biologist Helena Spiritus.

Code Red said its members had carried out protests in cities across the Netherlands and in Belgium, Germany and the Czech Republic. Media reports said several Shell petrol stations had been blocked in the morning to prevent customers from buying fuel.

Shell has pledged to bring down its overall carbon intensity by 65%. Intensity targets mean that absolute emissions can rise with increasing production.

None of the big oil companies currently meets U.N. targets to limit global warming despite ambitious goals set by Shell and Eni (ENI.MI), according to the Transition Pathway Initiative, which represents investors managing $19 trillion.

The US Government Is Auctioning $377K Worth of Bitcoin and Litecoin