Reassembling normality: A return to routine at reopened IKEA in Israel 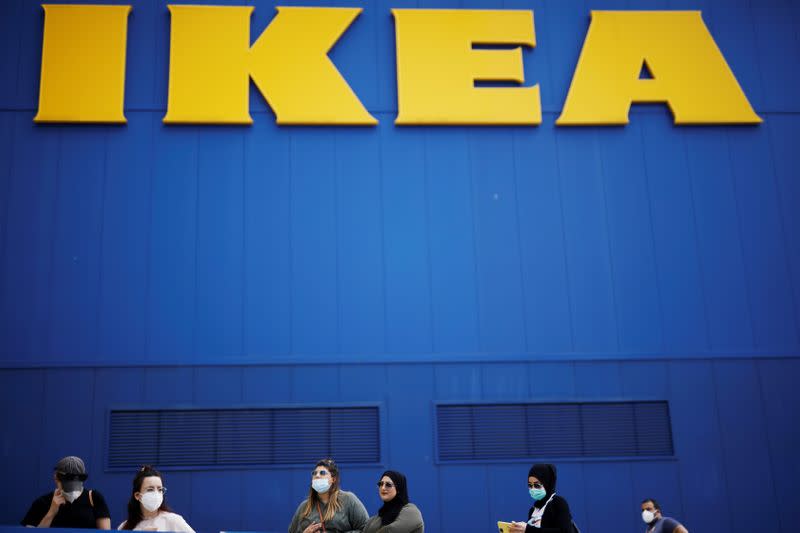 RISHON LEZION, Israel (Reuters) – For Israelis savouring some newfound freedom in the coronavirus crisis, a shopping excursion to a reopened IKEA store on Thursday was also about reassembling their normal lives after isolation at home.

A government decision to include IKEA, the world’s biggest furniture brand, among the types of outdoor stores allowed to get back to business in Israel seemed like a turning point in a gradual easing of a partial lockdown policy in place for weeks.

“It was really exciting when we got in the car and we’re like, ‘Oh my god, we’re driving away from Jerusalem’,” said Tal Bar, 25, a tour guide who travelled an hour to buy furniture for an apartment that she and a boyfriend had just moved into.

“We felt really excited and free,” she said outside the large blue-and-yellow store in Rishon Lezion, near Tel Aviv.

IKEA reopened three of its six branches in Israel on Wednesday and a day later lines were still forming at the Rishon Lezion outlet well before business hours.

Customers were kept two metres (6.6 feet) apart as they waited to enter. Temperatures were taken and masks required before the shoppers were let in.

And there were no Swedish meatballs: IKEA was keeping its in-store cafeterias, and children’s play areas, closed for now.

“This is exhausting standing in the lines. It’s been an hour,” said 23-year-old Sahar Adoni, who just completed his compulsory military service. “But this is really exciting because I don’t get out too much. So, I felt the need to get dressed very nice and use this situation to get out.”

Israel on Sunday relaxed curbs on movement after a slowdown in infection rates. Israel has reported 191 deaths and nearly 14,600 cases of COVID-19. The restrictions had forced people to stay at home and many businesses to close, and sent unemployment above 26%.

“It’s tiring to be home,” Lena Vinnik, 40, a chemical engineer from the Tel Aviv suburb of Givatayim said at the IKEA store. “I’m happy to go back to my regular routine. This is really exciting.”

But with indoor malls and open-air food markets still shut down, some merchants felt left out.

“Why did they open the hardware shops and not let us open?” Farkia asked. “The police are constantly watching. They don’t let anyone sell.”

Under social distancing, grocery stores and pharmacies have remained open, and the government was widely expected in days to add to the list of businesses that can host customers again.

Ingka Group, the biggest franchisee and owner of most IKEA stores worldwide, said last week it expected to start reopening stores in Europe in May while its business in China was roughly back to normal. In Germany, 11 stores reopened on Wednesday. IKEA operates through a franchise system, with the Northern Birch franchise owning the stores in Israel.

Bitcoin Suisse Completes a $48 Million Series A Financing Round

Terra (LUNA) Leads the Crypto Majors in a Breakout Session