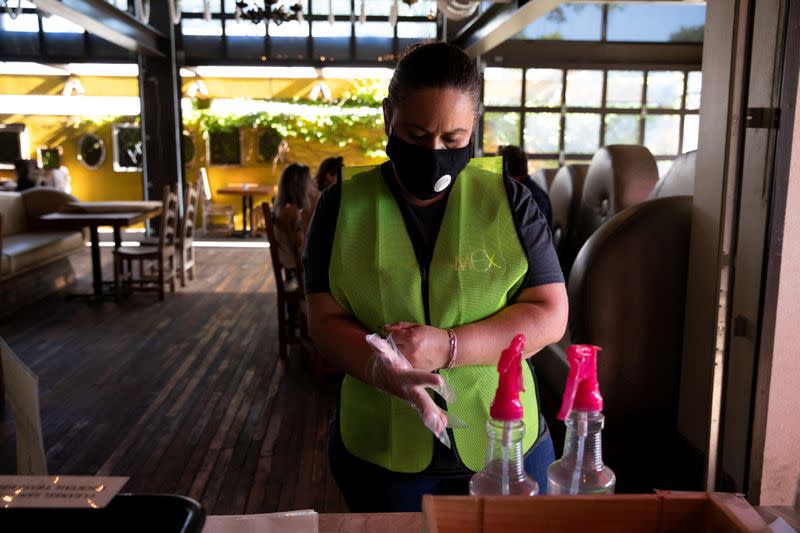 WASHINGTON (Reuters) – The U.S. economy likely created jobs at a record clip in June as more restaurants and bars resumed operations, which would offer further evidence that the COVID-19 recession was probably over, though a surge in cases of the coronavirus threatens the fledgling recovery.

The Labor Department’s closely watched monthly employment report on Thursday would add to a stream of data, including consumer spending, showing a sharp rebound in activity.

But the reopening of businesses after being shuttered in mid-March has unleashed a wave of coronavirus infections in large parts of the country, including the populous California, Florida and Texas.

Several states have been scaling back or pausing reopenings since late June and sent some workers home. The impact of these decisions will not show up in the employment data as the government surveyed businesses in the middle of the month.

Federal Reserve Chair Jerome Powell this week acknowledged the rebound in activity, saying the economy had “entered an important new phase and (had) done so sooner than expected.” But he cautioned the outlook “is extraordinarily uncertain” and would depend on “our success in containing the virus.”

“As the economy is reopening a lot of the jobs lost have come back and activity is coming back as well,” said Steven Blitz, chief U.S. economist at TS Lombard in New York. “The problem is the virus still has a big say in determining the trajectory of the recovery.”

According to a Reuters survey of economists, nonfarm payrolls likely increased by 3 million jobs in June, which would be the most since the government started keeping records in 1939. Payrolls rebounded 2.5 million in May after plunging by a historic 20.687 million in April.

Despite two straight months of eye-popping gains, employment would still be about 16.6 million jobs below its pre-pandemic level. The unemployment rate is forecast dipping to 12.3% from 13.3% in May.

Employment is increasing largely as companies rehire workers laid off when non-essential businesses like restaurants, bars, gyms and dental offices among others were closed to slow the spread of COVID-19.

Economists have attributed the burst in job gains to the government’s Paycheck Protection Program, giving businesses loans that can be partially forgiven if used for wages. Those funds are drying up.

In an economy that had already fallen into recession as of February, many companies, including some not initially impacted by lockdown measures, are struggling with weak demand.

Economists and industry watchers say this, together with the exhaustion of the PPP loans, has triggered a new wave of layoffs that is keeping weekly new applications for unemployment benefits extraordinarily high.

A separate report from the Labor Department on Thursday is expected to show initial claims for state unemployment benefits likely totaled a seasonally adjusted 1.355 million for the week ended June 27 down from 1.48 million in the prior week, according to another Reuters survey of economists.

“Job losses are starting to bleed to other sectors of the economy, income groups and different skill sets,” said Mark Zandi, chief economist at Moody’s Analytics in West Chester, Pennsylvania.

The claims report is also expected to show the number of people receiving benefits after an initial week of aid likely fell to 19 million in the week ending June 20 from 19.5 million the week before. These so-called continued claims, which are reported with a one-week lag, have dropped from a record 24.912 million in early May.

For a more accurate picture of the labor market, economists recommend focusing on continuing claims and data on the total number of unemployment checks recipients. About 30.6 million people were collecting unemployment checks in the first week of June.

The jobless rate, which is the more standard measure of unemployment, has been biased down since March by people incorrectly misclassifying themselves as “employed but absent from work.” The Labor Department’s Bureau of Labor Statistics has been working with the Census Bureau to rectify this.

Without the misclassification issue, the unemployment rate would have been 16.3% in May instead of 13.3% and would have peaked at about 19.7% in April.

Job gains last month were likely concentrated in the typically low paying leisure and hospitality industry. The return of these workers is expected to have further depressed average wages in June. Some companies are cutting wages and reducing hours. Average hourly earnings are forecast declining 0.7% after dropping 1.0% in May. The average workweek is expected to dropped to 34.5 hours from 34.7 hours.

States and local governments likely laid off more workers as they confront reduced revenues and stressed budgets caused by the pandemic.

“A federal government failure to aid state and local governments and avoid income cliffs over the summer would further jeopardize the recovery,” said Lydia Boussour, a senior U.S. economist at Oxford Economics in New York.

3 REITs That Announced Acquisitions to Grow Their DPU

USD/JPY Analysis: US Dollar Above an Important Support

Play2Earn: How Blockchain Can Power a Paradigm Shift in Building Game Economies