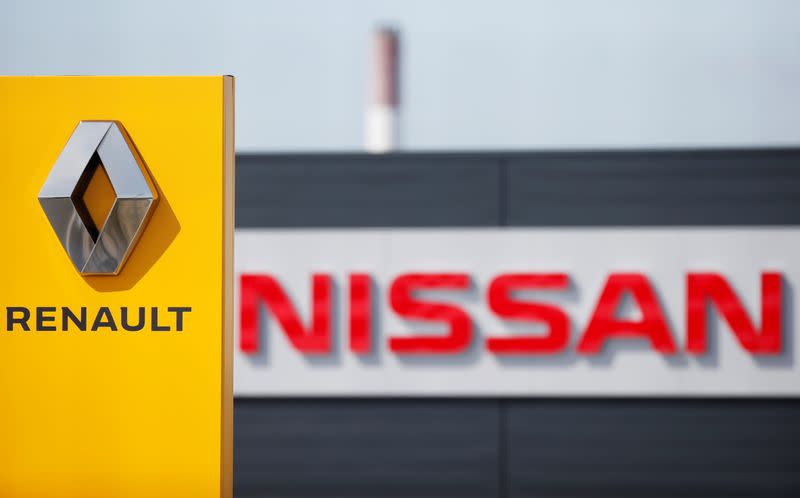 FILE PHOTO: The logos of car manufacturers Renault and Nissan are seen in front of dealerships of the companies in Reims

By Naomi Tajitsu and Gilles Guillaume

TOKYO/PARIS (Reuters) – When Renault SA <RENA.PA>, Nissan Motor Co <7201.T> and Mitsubishi Motors Corp <7211.T> announced the last strategy plan for their Alliance in September 2017, the goal was to become the world’s biggest automaker by 2022.

On Wednesday, the Alliance partners will outline a new plan with a less lofty objective: survival.

“There will be restructuring, there will be fixed costs reductions, there will be a number of projects which will be reduced,” a person with knowledge of the plan told Reuters, speaking on condition of anonymity ahead of the announcement.

The three carmakers are reeling from the coronavirus pandemic which engulfed them just as they were trying to rework their partnership after the arrest in 2018 and subsequent ouster of its chairman and chief architect, Carlos Ghosn.

Profits are plunging at all three automakers and thousands of jobs will be at risk as Renault and Nissan announce separate restructuring plans later this week.

The reworked Alliance is expected to focus on more systematic divisions of labour, with one partner leading for a particular type of vehicle and geography while the others follow.

“The plan will have a positive spirit, based on a clear leader-follower scheme and on complementarity between companies,” a source close to Renault said.

Years of bickering over cost sharing and capital structures have meant the Alliance has so far largely failed to convert its global scale into a competitive advantage beyond the joint procurement of parts.

The French state, which already owns 15% of Renault, will now become a not-so-silent partner in the Alliance.

Renault is seeking 5 billion euros ($5.5 billion) in state guaranteed loans to help weather the hit to sales from the global pandemic. In return, the French government wants Renault to invest in electric vehicles, advanced batteries and other technology to support jobs in France.

Another big question will be the place of German automaker Daimler AG <DAIGn.DE> in the Alliance. Daimler joined the Franco-Japanese partnership in 2010, promising cost savings for future vans, small engines and pick-up trucks. But common projects have since become few and far between.

Working together has posed challenges to Renault, Nissan and junior partner Mitsubishi, which joined the alliance in 2016, due to differences in corporate cultures and simmering tensions over the Alliance’s capital structure.

Renault owns 43% of Nissan while Nissan has 15% of the French carmaker, but no voting rights. This structure has caused friction in Japan, ever since Renault saved its bigger partner from financial ruin in 1999.

Ghosn championed steps toward a full merger, which Nissan has strongly opposed.

Alliance Chairman Jean-Dominique Senard earlier this year said that the automakers had “no other option” but to deepen cooperation, though senior alliance sources say any talk of a full-blown merger has been shelved for now.

(Reporting by Naomi Tajitsu in Tokyo, Norihiko Shirouzu in Beijing and Gilles Guillaume in Paris; Editing by Joe White and David Clarke)