Samsung heir appears in court, awaits decision on whether he'll be jailed again 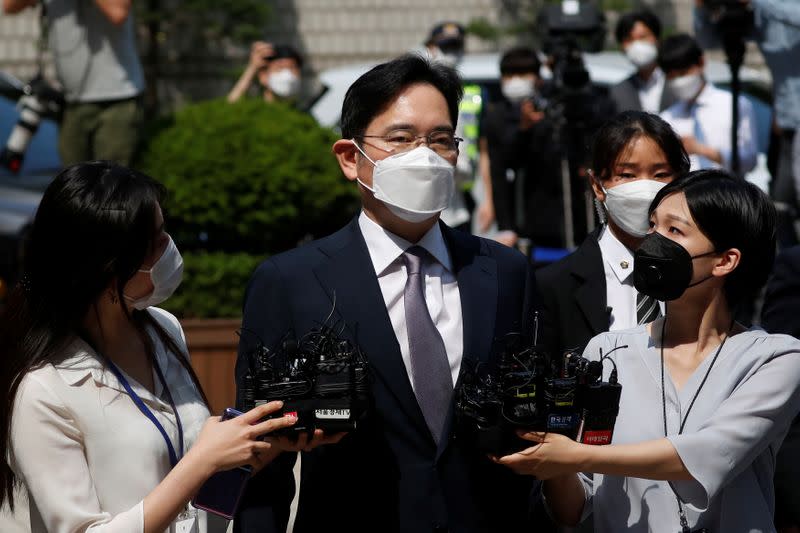 Samsung Group heir Jay Y. Lee arrives for a court hearing to review a detention warrant request against him at the Seoul Central District Court in Seoul

SEOUL (Reuters) – Samsung Group heir Jay Y. Lee on Monday arrived at a South Korean court which will rule whether he will be sent back to jail after more than two years of freedom, as new allegations dog the executive and cast a pall over the country’s top conglomerate.

Prosecutors on Thursday asked the court to issue an arrest warrant against Lee, culminating a probe into accounting fraud and a controversial 2015 merger of two Samsung affiliates that they said helped facilitate Lee’s plan to assume greater control of the group.

Lee, 51, wearing a face mask and a dark suit, appeared at the Seoul court for a hearing scheduled to start at 10:30 a.m. (0230 GMT). He did not answer questions from reporters before entering the court.

After the hearing, he is expected to head to a detention centre to await the judge’s decision, expected on Monday or early Tuesday.

Samsung on Friday denied the allegation of stock-manipulation against Lee, saying it was “beyond common sense” to claim Lee was involved in the decision-making.

In a further statement over the weekend, the group said the lengthy probe is weighing on management, which is in a “crisis” at a time when the coronavirus pandemic and U.S.-China trade disputes are adding to uncertainty.

The company declined to make Lee available for comment.

He served in jail for about one year until Feb. 2018 for his role in a bribery scandal in which he was accused of giving horses as gifts to win support from the government of former President Park Geun-hye for the merger.

The merger increased his control of the group – and of its crown jewel, Samsung Electronics Co <005930.KS>, South Korea’s biggest company. His father, Lee Kun-hee, has been ailing for some time.

“If he is arrested, this will further hurt the reputation of Lee and Samsung. There will more questions about his legitimacy as the CEO and successor of the company,” Chang Sea-jin, business professor at Korea Advanced Institute of Science & Technology.

“The public would think, ‘Oh he may have done something wrong again.'”