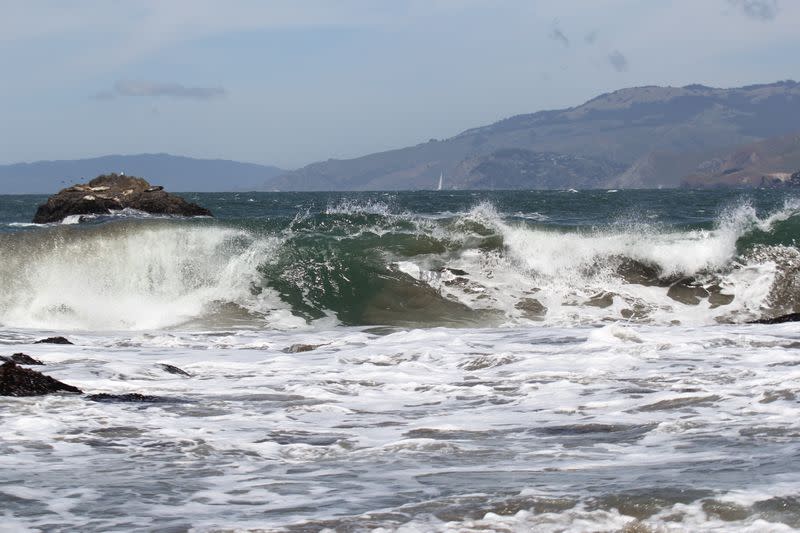 Waves crash at a beach in San Francisco

But founders Patrick and John Collison are not creating a waterfront hideaway. Instead, Stripe is supporting a radical approach to fighting climate change. The beach project – taking coarse-milled olivine to the water’s edge so the waves can grind it up, allowing the ocean to absorb more carbon – is one of four investments in carbon removal Stripe will announce today.

Another technology deal will fund putting carbon into concrete to strengthen it, while a third takes biomass that would decompose and spew carbon – such as almond shells – and produces bio-oil for burial far underground.

Stripe is spending $1 million all told, following CEO Patrick Collison’s August pledge that instead of buying cheap carbon offsets, such as those from landowners who agree not to cut trees, the company would pay much more for innovative methods to get carbon dioxide out of the air.

Some studies https://ec.europa.eu/clima/sites/clima/files/ets/docs/clean_dev_mechanism_en.pdf have found that a majority of offsets used for regulatory compliance or tax breaks do not measurably and effectively improve the air, even if they let companies claim to be carbon neutral.

Instead of looking for the cheapest “negative ton” offsets for carbon emissions, which can cost as little as $10, Stripe will pay as much as $800 per ton for promising new approaches.

But the projects had to have a plausible path to neutralizing large amounts of carbon at low cost, Orbuch said.

Stripe is far from the first to sponsor carbon removal, which can take a multitude of forms, from tree-planting to fans sucking carbon dioxide from smokestacks or the open air.

But the collective scale of existing projects is orders of magnitude from where the experts say it needs be in 2050. They say there is no way to limit temperature increases to those in the global Paris agreement without massive carbon removal on top of emission reduction.

“The Intergovernmental Panel on Climate Change says this thing is very important, and yet nobody is commercially funding this,” Collison told Reuters.

Some environmentalists have faulted alternative carbon-removal efforts as a distraction from emission cuts.

Though he had not reviewed Stripe’s projects, Carroll Muffett of the nonprofit Center for International Environmental Law warned that direct air capture consumes too much energy to be efficient, while mineralization projects like the olivine plan would require mining on a scale rivaling the coal industry to attain global impact.

“It is best understood as a public relations stunt,” Muffett said of Stripe’s initiative.

Stripe’s money alone is a pittance, but the company believes its approach can act like a multiplier. Stripe will publish its criteria and the detailed explanations it required of the more than 20 applicants for funding, a level of transparency that has excited such experts as Steven Hamburg, chief scientist at the Environmental Defense Fund.

“We have to help catalyze the research and development and the learning, so we really understand what are options are,” said Hamburg, a lead author at the IPCC, co-winner of the 2007 Nobel Peace Prize.

Stripe is already having an impact. Microsoft was struck by Collison’s promise to spend more than necessary in hopes of spurring innovation. Microsoft later said it would invest $1 billion on carbon removal.

TAKING CARBON OUT OF THE AIR

Though forestry projects are popular, their success is hard to measure, Stripe’s advisors warned. Someone promising not to cut trees might drive up the price for that kind of tree, prompting others to sell.

So Stripe moved toward four projects outside of forestry.

One of them, Switzerland-based ClimeWorks, is one of the three best-known startups that take carbon straight out the air.

ClimeWorks’ biggest plant is in Iceland, where it takes advantage of geothermal heart for energy to bury carbon 900 meters underground.

Stripe is one of a handful of corporate customers for negative emissions and will help fund a new plant about five times as big, said founder Jan Wurzbacher.

The second is eight-year-old CarbonCure Technologies, which puts carbon into concrete. CarbonCure’s method is used in 285 concrete plants.

The venture-backed Canadian company excited Stripe’s advisors because the concrete industry is one of the largest contributors of greenhouse gases, and because the technology makes financial sense even before government subsidies for emission reductions.

Though CarbonCure’s investors include Microsoft and Amazon founders Bill Gates and Jeff Bezos, Stripe is doing something new, paying not for stock or the technology but for the carbon elimination.

“It’s creating a market,” said Robert Niven, founder and chief executive, who will use the money to win more customers, hopefully for negative emissions as well as concrete technology.

The third recipient is a San Francisco-based vendor called Charm Industrial, a for-profit launched two years ago by the CEO of Segment, a private software company valued at more than $1 billion.

Inspired by Stripe’s call to come up with another alternative, Charm will produce bio-oil from biomass that would otherwise decompose, then sequester it underground. (Burying the matter directly would take too much energy and let it produce methane, which does even more harm to the atmosphere than carbon dioxide.)

And the last is the olivine project, known as Project Vesta. Vesta is a nonprofit started last year by founders including Eric Matzner, a self-described “biohacker” whose main company makes cognitive supplements.

Matzner’s application promises to use Stripe’s money to take its experiments with olivine out of the lab and to the Caribbean beach.

In seawater, olivine minerals form solid carbon compounds and also reduce the water’s acidity, so it can absorb more carbon dioxide from the air.

The trick is that milling the stone to create more surface area and accelerate the erosion consumes energy that might come from fossil fuels.

Vesta wants to harness natural wave power. With Stripe as its first customer, it will spread olivine on the beach and see if the water can grind it down enough to speed up de-acidification.

“Mineral weathering is an idea that’s only now emerging,” said Hamburg of the Environmental Defense Fund. “It clearly works, but when, where and how, and how does the economics work? That becomes the key.”

Public Mint Launches, Announces 200 Banks Are On Board