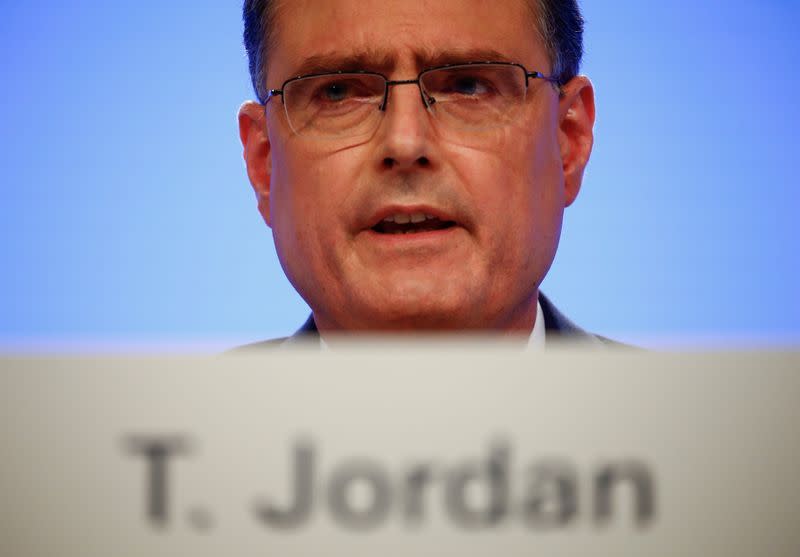 By John Revill and Silke Koltrowitz

BERN (Reuters) – The Swiss National Bank renewed its commitment to an ultra-expansive monetary policy on Thursday, saying its unconventional measures will help Switzerland deal with its sharpest recession in decades.

The central bank kept its policy interest rate and the rate it charges on sight deposits both locked at minus 0.75%, as unanimously expected by analysts polled by Reuters.

Chairman Thomas Jordan said the central bank’s stance would help Switzerland navigate the coronavirus crisis which would push the country into the deepest recession since the oil shock of the 1970s. The SNB forecasts a 6% decline in GDP this year.

“We need more inflation and a much better economic outlook,” before the bank could consider a policy change, Jordan told a news conference.

Although there were early signs of a recovery, GDP will not return quickly to pre-crisis level, he said.

The SNB’s negative interest rates, the lowest in the world, provided favourable financing conditions for business and the public sector, Jordan said.

The rates, along with foreign currency interventions, were also restraining a rise in the value of the Swiss franc.

“A further appreciation of the Swiss franc – which was already highly valued – would have resulted in additional difficulties for our economy,” Jordan said.

The safe-haven franc rose to its highest level against the euro in nearly five years last month as investors sought stable assets during the coronavirus pandemic.

To protect the country’s export-orientated economy, the SNB has responded by massively ramping up foreign currency purchases. Sight deposits – a proxy for the SNB’s interventions – have risen by nearly 100 billion Swiss francs ($105 billion) this year, dwarfing the interventions for the whole of 2018 and 2019.

Jordan said the SNB had made “substantial interventions” in recent weeks, although the situation had eased recently.

Sentiment toward the euro has been boosted by the European Union’s 750 billion euro ($845 billion) support plan and the European Central Bank expanding its stimulus package.

The SNB was also helping to prevent a credit crunch by increasing the amount banks can park with it overnight before negative rates apply and by providing liquidity through its COVID-19 Refinancing Facility, Jordan said.

A reduction in the SNB’s forward looking inflation forecasts pointed to the central bank keeping its expansive stance, analysts said.

“Although the SNB does not give an explicit forward guidance, the sharp reduction in inflation projections indicate the likelihood that policy rates will remain at the -0.75% for a few more years.”