Tel Aviv has spring in its step again, but businesses face new costs 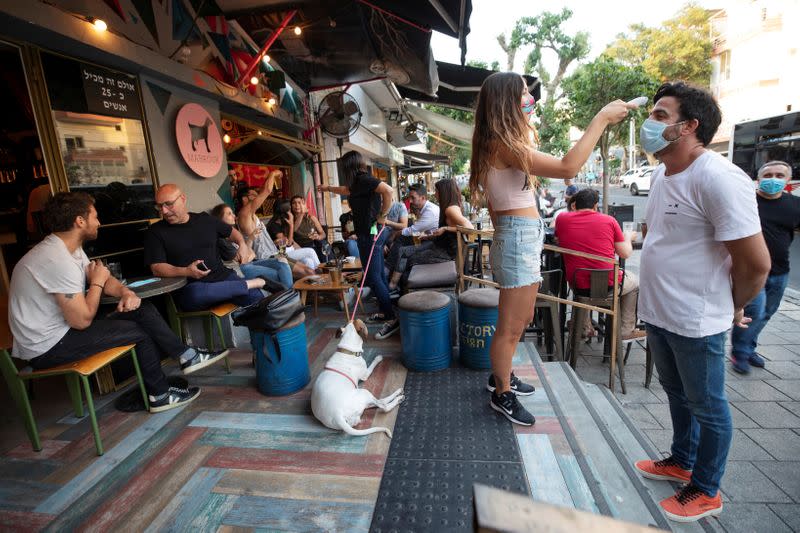 A customer has his temperature taken at the entrance to a restaurant as some businesses reopened at the end of last month under a host of new rules, following weeks of shutdown amid the coronavirus disease (COVID-19) crisis, in Tel Aviv, Israel

TEL AVIV (Reuters) – Israel’s main coastal city has returned to work – and play – but the coronavirus pandemic has brought new challenges that will weigh heavily on Tel Aviv’s restaurants, bars and other businesses emerging from lockdown.

Although Israel has escaped the pandemic relatively lightly so far, with 298 deaths and 18,000 cases, its tourist-reliant economy took a big hit after going into lockdown in mid-March, contracting an annual 7.1% in the first quarter.

More than 300,000 people have returned to work since Israel began lifting restrictions last month, but airports are still closed to foreign visitors.

And Tel Aviv – Israel’s commercial and entertainment capital – is experiencing the kind of problems that businesses the world over are having to deal with.

Some sectors have not yet re-emerged from lockdown and others are adapting to new rules and red tape, including insisting face masks be worn, providing hand sanitizer and thermometers and spacing tables further apart in restaurants.

“Regular business flow is still not back to normal because there are still people who are scared,” said Ben Rachmani, of the Four Sixteen vegan restaurant/bar.

Evening trade was “very solid” but lunchtime “messed up” because many former customers are still working from home.

Rachmani said he had to re-open because he would only have been able to survive a few months of delivering takeaways and not paying rent.

“If it had gone on until September or October, I would have been done,” he said.

Some said that the May 27 re-opening had come too soon. On Monday, Prime Minister Benjamin Netanyahu said the country would stop easing restrictions after a sharp increase in COVID-19 cases. [nL8N2DL414]

He urged the public to keep social distancing and wear face masks – guidelines that some Israelis, including in Tel Aviv, had been ignoring as they sought to return to normality.

Others have remained cautious.

In the Dizengoff Street shopping area, Avi Amir said his hairdressing store lost 40% of its business because older clients were staying home, and fewer customers can be in the store at once.

In the last week, Amir said, he received four fines totalling $1,100 from municipal inspectors who said staff were not wearing plastic face shields.

However, for one woman entrepreneur, the coronavirus crisis has forced her to try something new. After losing her hotel job, Victoria Janitsky took advantage of lower rents in a prime location to open a nail salon.

“To open a new business is a hard thing, so it’s just another hard procedure,” she said.

Oil Drops Over a Percent After OPEC+ Price Increase, Demand and Supply Pressure

In the News: Is Your Investment A Scam? Here’s How to Tell

DBS Multiplier Is The Most Pandemic-proof Savings Account Yet. Here’s Why.