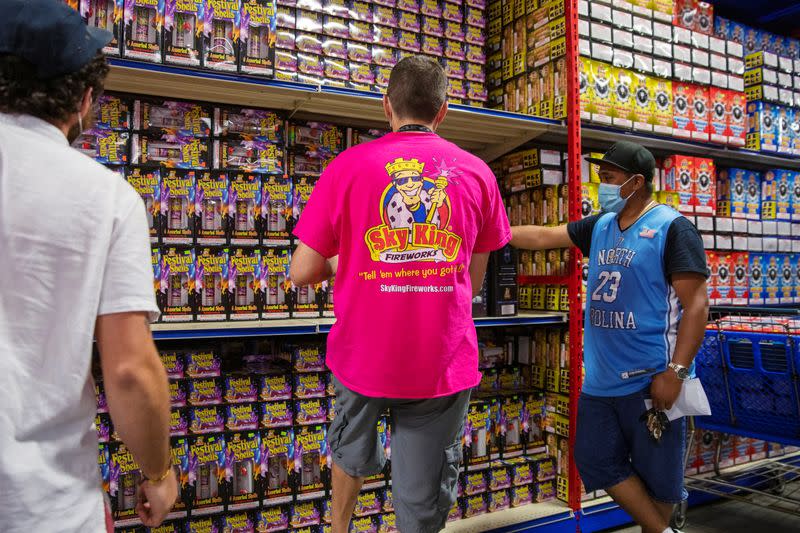 Shoppers look through fireworks for sale at Sky King Fireworks in Morrisville, Pennsylvania

NEW YORK (Reuters) – The piercing boom of illegal fireworks in New York is music to the ears of Joe VanOudenhove, who runs a legal fireworks business in Pennsylvania.

VanOudenhove is by no means the only source of the nighttime explosions that have drawn a raft of complaints in New York, but his stores are enjoying an unprecedented pyrotechnics craze in a country constrained by the coronavirus.

“It’s a banner year for the fireworks industry,” he said. “The uptick in demand and sales of fireworks is coast to coast.”

VanOudenhove, the managing partner of Sky King Fireworks whose 20 stores in four states make it one of the largest purveyors of fireworks on the East Coast, estimates that recent sales are up from 50% to 200% from last year, more than anything he has seen in 25 years.

A “perfect storm” of forces is behind the burst of demand for the sky rockets, roman candles and other glittering and exploding consumer grade fireworks Sky King sells, VanOudenhove said.

But much of it has to do with families being starved for entertainment in a locked-down world without concerts or sporting events, he said.

“A few weeks ago, we had a family drive to Erie, Pennsylvania, from either New Jersey or New York somewhere and spend $150 on fireworks because they just wanted to get out of the house,” he said.

The fireworks rage has shattered the evening quiet of many a U.S. neighborhood, prompting a flood of complaints, especially in New York where calls to police about fireworks in the first half of June jumped one-hundredfold from last year.

VanOudenhove said on Friday he has not seen any out-of-state police around his stores since New York officials launched a fireworks crackdown on Tuesday.

Customers are asked to sign forms saying that they understand the rules of the fireworks’ final destination, he said.

And they keep coming.