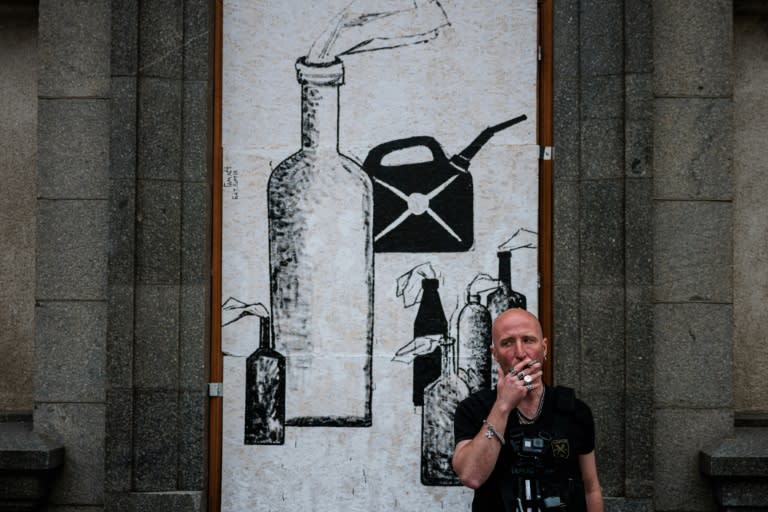 The 35-year-old Ukrainian has remained in his hometown of Kharkiv, Ukraine’s second-biggest city, to paint its walls even amid the destruction of Russia’s invasion.

Recognised internationally with exhibitions and paintings from Lima to London, Gamlet has put aside his globe-trotting success and now uses his talent to support the home front during the war.

“If I move I can have my career somewhere abroad. But it will only be comfort. In Ukraine, I have the feeling that I’m building the country,” he said.

“All the city is my house, all the city (is) my gallery,” the bald artist added, with four silver rings glinting on his left hand.

He writes the words “hellish hospitality” on the latest addition to his Kharkiv portfolio, a combination of Molotov cocktails and a petrol can drawn in a city centre scarred by Russian artillery fire.

At the start of the war, Gamlet spent a night in a Kharkiv metro station and 10 days at his parents’ house before moving with relatives to Ivano-Frankivsk in relatively untouched western Ukraine.

He spent two months there raising funds for humanitarian aid and Ukraine’s army, saying he sold a painting for two night vision devices.

Then came a telephone call from the commander of the Khartia Battalion, whose insignia he proudly sports on his vest. Every painting is signed with its name.

“You’re staying in Ivano-Frankivsk for too long. We need you here (in Kharkiv) — you have to paint,” the commander told him.

Gamlet believes working in the street, where he can paint when and where he wants, is more important for public morale than getting exposure in galleries.

“I see people smiling and happy because they see a destroyed building which they loved but smile when they see painting,” he explained.

Gamlet also sees his work as increasing access to art, which he prioritises above simply earning money from selling pictures.

“Street art, it’s the story for people who have never been to (an) exhibition or who don’t visit museums, but they know my work in the street.”

Gamlet hopes that his works, painted on wood covering the windows and exteriors of damaged buildings, will be given to a future war museum or sold for a good cause.

Only one of the eight paintings he completed in the eastern city of Izyum survived battles with Russian forces in recent weeks, he added, while other works were lost in Berdyansk and Mariupol.

But he says he does not see his art as a weapon against Russia.

“What I’m doing helps real fighters with weapons to uphold this country. This country, apart from people and cities, has artists, musicians, and culture they love. This inspires them (soldiers) to fight and defend.”

– Brushes with the law –

This is the second time that Gamlet has stayed in Kharkiv for political reasons.

He was ready to move to Paris in 2013 before the pro-Western Maidan revolution toppled Ukraine’s pro-Russian leader Viktor Yanukovych in 2014.

That proved to be a watershed moment. “In 2014 I started painting with a new powerful spirit. I understood I was Ukrainian,” he said.

Gamlet started painting Kharkiv’s walls when he was 17 — and his artistic activities earned him many brushes with the law.

He said he would spend as much money on “corruption” to leave police custody as he did on paint.

After yet another arrest, Gamlet decided to challenge the officers.

“I told them, ‘What are you doing? Don’t you have other things to do? Crimea was annexed and you found (a) terrorist like me.’ Then they stopped bothering,” he recalled.

Since then, he says he rejected an offer from the city to become its official painter in order to remain independent.

Gamlet studied art at university and art school for eight years. But he decided to do away with colours 12 years ago, preferring the minimalism of black and white in his work.

“I don’t want to paint beautiful paintings, but great ideas,” he explained.

“In the world everything is smeared and it’s hard to understand if it’s good or bad. In painting I can make it black and white.”

El Salvador ‘has not had any losses’ due to Bitcoin price dive, finance minister says

UK and EU ban sales of luxury goods to Russia