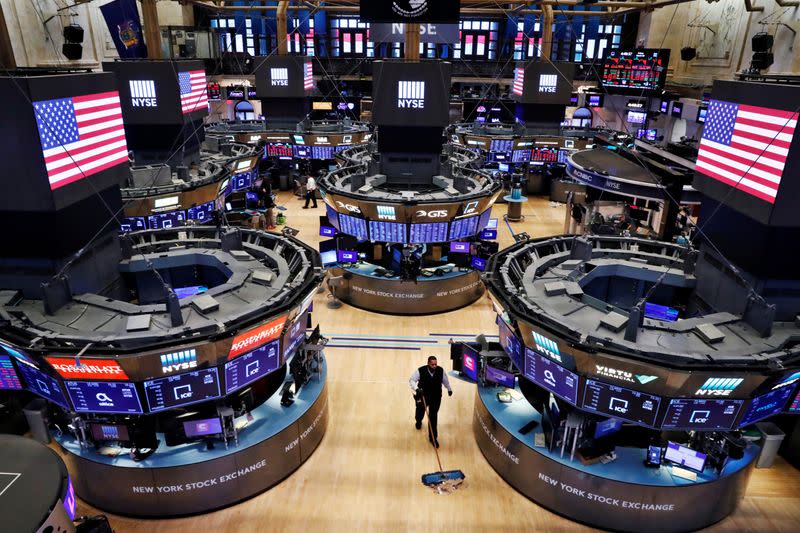 (Reuters) – Wall Street rallied in a rocky session on Thursday as beaten-down technology shares gained favor after data showing a surge in the sale of new homes revived faith in the economic recovery even as U.S. jobless claims rose unexpectedly.

Stocks also reacted positively to news of efforts to enact further stimulus in Washington, helping lift the S&P to a session high, although the index then turned negative before retracing some gains.

“Fear of missing out has turned into to fear of losing actual money,” Dick said. “This is a shakeout of all the Robinhood traders, a shakeout of retail investors. They’re getting punished, and rightfully so, because you can’t just buy stocks out of a hat thinking stocks only go up.”

Democrats in the U.S. House of Representatives are working on a $2.2 trillion coronavirus stimulus package that could be voted on next week, a key lawmaker said, as House Speaker Nancy Pelosi reiterated she is ready to negotiate with the White House.

Wall Street started the day lower after the jobless claims data. The S&P 500 briefly fell 10% below the intraday record peak it hit Sept. 2 for the second time in recent days.

Dow constituents, considered a barometer of economic confidence, lagged the S&P 500 as data showed 870,000 Americans applied for jobless benefits in the week ended Sept. 19, up from 866,000 in the previous week.

Homebuilders <.SPHOME> rose 0.73% after the Commerce Department reported that sales of new single-family homes rose to their highest level in nearly 14 years in August. That report followed data this week showing sales of previously owned homes also near a 14-year high.

Phil Orlando, chief equity strategist at Federated Hermes, said notwithstanding spats of poor data, the U.S. economy is on a path to a powerful V-shaped recovery as seen in auto sales, the housing market and overall consumer spending.

“All of the inventory rebuilding is starting, all of the things you want to see are happening,” Orlando said. “Now, are there some chinks in the armor? Yes, just saw it in the claims numbers this morning.”

The CBOE volatility index <.VIX>, known as Wall Street’s fear gauge and which is hovering near two-week highs, is expected to climb in the run-up to the quarter-end next week.

“The key is the VIX index, which has not yet reached levels that would suggest a continued strong move to the downside,” said Peter Cardillo, chief market economist at Spartan Capital Securities in New York. “So you might get a day of bargain hunting followed by a day of selling, but as the last days of September come into place, we should begin to see some sort of window dressing by institutions.”

Nikola Corp <NKLA.O>, which is set for its biggest weekly decline ever, slid 9.69% as Wedbush downgraded the stock to “underperform.”

Declining issues outnumbered advancing ones on the NYSE by a 1.08-to-1 ratio; on Nasdaq, a 1.36-to-1 ratio favored decliners.

Afraid of DeFi? Here’s how to earn 41% APY on Bitcoin without wrapping it