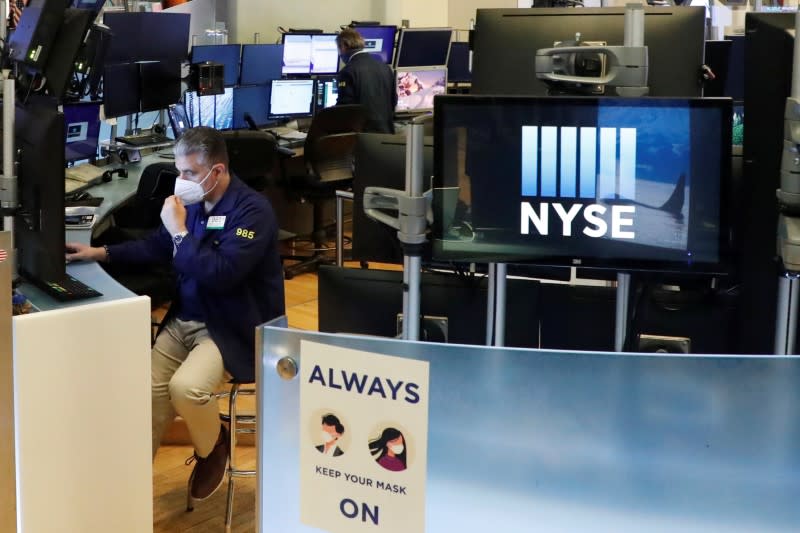 By Devik Jain and Shreyashi Sanyal

(Reuters) – The Nasdaq 100 index retreated from an intraday record high on Thursday, with the S&P 500 and Dow Jones indexes also slipping as a rally fueled by hopes of a post-coronavirus economic recovery fizzled out.

Wall Street’s main indexes had gained in early trading as U.S. weekly jobless claims fell below 2 million for the first time since mid-March, bolstering optimism around a pickup in business activity as economies reopened.

American Airlines Group Inc <AAL.O> surged 24.9% after revealing plans to fly more than 55% of its July 2019 domestic capacity and boost its U.S. flight schedule next month. The NYSE Arca airlines index <.XAL> jumped 8.2% to a near three-month high.

But nine of the 11 S&P 500 sectors were trading lower by midday, with the defensive real estate <.SPLRCR> and utilities <.SPLRCU> indexes leading declines.

“There’s a belief the economy is going to reopen and when you partner that up with the liquidity provided by global central banks, now is a somewhat safe time to be investing in equities,” said Robert Pavlik, chief investment strategist at SlateStone Wealth LLC in New York.

“But (the market is) going to go through periods where it takes a little bit of a pause, especially after seeing the kind of gains we’ve had in the last couple of days.”

Wall Street’s main indexes have recovered sharply from their March lows and the Nasdaq Composite index <.IXIC>, which is wider and more closely watched than the Nasdaq 100 <.NDX>, is now only 2% below its record high hit in February.

The rebound has been partly driven by tech-related firms, including Amazon.com Inc <AMZN.O> and Netflix Inc <NFLX.O>, deemed “stay-at-home” stocks during the weeks of a lockdown imposed to contain the novel coronavirus.

“In this market, you need to be selective and technology continues to be one of our favorite sectors,” said Larry Adam, chief investment officer at Raymond James in Baltimore, Maryland.

Meanwhile, nationwide protests over the death of an unarmed black man in police custody dwindled overnight into early Thursday after prosecutors leveled new charges against four Minneapolis policemen implicated in the killing.

But Charles Schwab Corp <SCHW.N> gained 1.9% after it received an anti-trust approval from the Department of Justice for its purchase of TD Ameritrade Holding Corp <AMTD.O>. TD Ameritrade rose 5.1%.

Declining issues slightly outnumbered advancers on the NYSE and the Nasdaq.

This chicken wing stock may cook up a sizzling 40% return: analyst

U.S. post office loss doubles as it warns COVID-19 will hit its finances